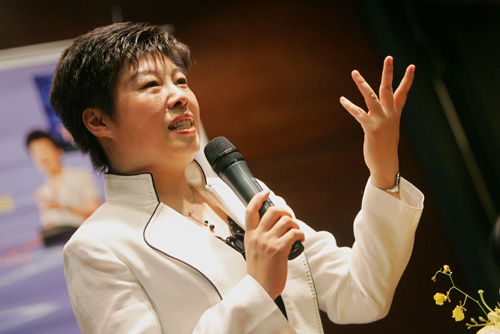 With her clear, rapid-fire lectures, Yu Dan has become an instant television celebrity, hawking the moral teachings of a 2,500-year-old philosopher to an audience of millions in communist China.
Yesterday, Yu, a media expert and Beijing Normal University professor, released the Taiwanese version of her latest book - a 200-page compilation of lectures she delivered on the Confucian Analects while appearing on China's Central Television last October.
The work has sold some 4 million copies on the mainland, nearly double the number of J.K. Rowling's Harry Potter books, according to her Chinese publisher.
Her appearance in Taiwan was part of a growing cultural exchange between the self-governing island and the communist mainland, which split amid civil war in 1949.
Philosopher's reincarnation
With her soaring popularity, she is regarded by many as the modern day incarnation of China's most respected philosopher, whose observations developed into a complex social system that dominated Chinese thought until the communist victory in 1949.
Lin Tsai-chueh, the Taiwanese publisher of Yu's book, said her popularity on the mainland reflected a "classics fever" in China that developed following the gradual dumping of orthodox Marxism in favor of laissez-fair capitalism in the 1980s and 1990s.
"She relates the analects to the day-to-day experience of ordinary Chinese and comforts their souls in the midst of China's big transition," Lin said.
Wearing short, stylish hair with cranberry-colored highlights, the 42-year-old scholar told a packed Taipei auditorium that her main goal was to revive the classical Chinese teachings that as recently as 35 years ago had been anathema in her home country.
"We often think classics are too difficult, but as a Chinese, the classics are the origin of our being, works that comfort us in the midst of our bewilderment," Yu said.
"In this complex world, we seek simplicity out of grandeur, the simple truths that we can find in the pithiness of Confucius' teachings."
Confucius' analects comprise responses the philosopher provided to 72 disciples who toured the countryside with him during the so-called Warring States Period - a time of great political instability.
According to Yu, Confucius answered one disciple's question about the most essential quality a human being can have with a simple one-word answer: forgiveness.
Your attitude
"Whatever attitude you adopt, you will receive the same quality of forgiveness from others you meet, and you will have a smooth life throughout," she said.
Appearing with Yu in Taipei was Chinese historian Yen Tsongnian, who released two volumes of his own book, "Sixty years of Ming and Qing Dynasties," recounting the fall of the Ming in the second quarter of the 17th century and the rise of the Qing over the succeeding decades.
Yen also gained fame appearing on the Central Television program on the Chinese classics.