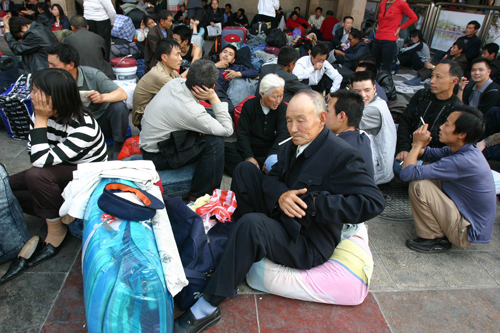 China's "Golden Week" holidays have turned into logistical nightmares as millions of people take off at the same time - leading to calls for change from a growing number of economists.
Abolishing the holidays might be politically unfeasible but staggering them and allowing people to go away on vacation at different times of the year could be possible, they say.
"Golden Weeks have both positive and negative effects," said Ning Xiangdong, an economist from Beijing's Tsinghua University.
"People go travelling all over China, and that's great for the economy, but it also creates traffic problems, and the facilities are not geared to handling so many tourists," he said.
This year, a total of 150 million Chinese are expected to get on trains, buses and planes, as they use the opportunity of seven days off work, beginning Tuesday, to escape the daily grind.
That is exactly what the government envisaged when, out of the blue, it introduced three week-long holidays in 1999 - May Day, the October 1 National Day, and the Spring Festival, which falls in January or February every year.
It happened at a time when China was reeling from the Asian financial crisis and desperately needed more growth, leading to one of the world's most liberal holiday regimes almost overnight.
Now, after four consecutive years of double-digit growth, the economic rationale is felt much less keenly, but the negative side effects of vacationing en masse are as obvious as ever.
Trains are so crowded they look like Guinness record attempts, the average Beijing or Shanghai park is a seething sea of people, and even no-star hotels are fully booked.
This makes it difficult for the individual holiday-making family, but for the policy makers there are even more compelling reasons to start thinking about alternatives.
Although official statistics claim that past Golden Weeks have contributed altogether 670 billion yuan (US$87 billion) to the economy, analysts argue the holidays are of declining value.
"If you look at the contribution of the Golden Weeks to the economy, the effect is approaching zero," said Hu Xingdou, a professor of economics at the Beijing Institute of Technology.
Deputies from the national legislature proposed changes to the holidays when they gathered for their annual full meeting in March.
They called for shortened Labor Day (May Day) and National Day holidays, and the addition of traditional festivals such as the Tomb Sweeping Day in early April.
But reducing the holidays, let alone abolishing them, would not be a popular decision, economists said.
According to Zhang Jun, an economist at Shanghai's Fudan University, the three Golden Weeks are rapidly becoming an ingrained part of the local culture.
"Initially, the Golden Week holidays were introduced in order to create more economic growth, but boosting the economy is no longer an important reason for keeping them," he said.
As a compromise solution, the government is now actively considering a new system of staggered holidays, according to economists, who are often the first to know because their advice is sought ahead of major policy decisions.
"The cabinet is considering staggering the Golden Week holidays and letting people choose themselves when to have them," said He Jianmin, a tourism expert at the Shanghai University of Finance and Economics.
"The number of days off will remain the same, but it's preferable to allow people to make their own choice."
The average Chinese now seems tired enough of the holiday crowds to support reform.
A poll of 40,000 people conducted by popular Internet portal sohu.com in December showed that 65 percent were in favor of replacing the current system with something else.
Some analysts argued, however, that if the welfare of China's workers were really a priority, there were other measures that the government might consider taking.
"I think the government should boost the salaries of the workforce, and improve social security," said Hu of the Beijing Institute of Technology.
"Genuinely protecting the interests of the workers is better than promoting the 'Golden Weeks.'"