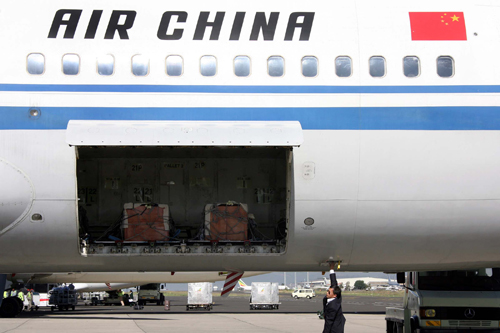 Ethiopian rebels called for internationally mediated peace talks with the government yesterday, hours after releasing seven Chinese and two Ethiopian oil workers taken hostage last week.
In a statement sent to news organizations, the Ogaden National Liberation Front said the workers were handed over to the International Committee of the Red Cross during a temporary cease-fire on Sunday. The rebels said they expected government troops to begin a crackdown in the eastern Ogaden region, populated mostly by ethnic Somalis.
The group says it is fighting for the region's right to self-determination.
"We call upon the international community to witness first hand what has become the norm of terror perpetrated by the (government) against the people of Ogaden," the rebel statement said. The government "must take a different approach to conflict resolution and agree to internationally witnessed dialogue with legitimate representatives of the people of Ogaden, the ONLF."
The rebels released the oil workers to Ethiopian and Chinese authorities on Sunday in southeastern Ethiopia, the Red Cross said. They had been seized during an attack on a Chinese oil exploration facility last week.
Late Sunday, the official Ethiopian News Agency released a statement from the Ministry of Information saying the oil workers had safely arrived in the town of Degehabur, while repeating earlier allegations that longtime rival Eritrea sponsored the rebel attack.
"ONLF perpetrated the horrendous act of terrorism in a plot orchestrated by the government in Asmara," the ministry said.
Ethiopia and Eritrea have yet to reach a final resolution on their mutual border, which they fought a war over from 1998-2000. Tensions between the two countries have worsened in recent months.
The Front claimed responsibility for the attack on the Chinese-owned oil exploration field in eastern Ethiopia on April 24, which killed 65 Ethiopians and nine Chinese. The group said in a statement that six other Chinese workers "were removed from the battlefield for their own safety."
The bodies of the nine Chinese killed in the attack arrived home in central China yesterday, state media reported.
Xinhua News Agency said a chartered Air China plane carrying the victims in nine coffins covered with white peonies arrived at 2:30 a.m. at Xinzheng, southeast of Henan province's capital, Zhengzhou.
The rebels also said that no foreign company should try to work in the Ogaden region, a large state along the Somali border. The Chinese government has condemned last Tuesday's attack and rejected the group's warning.