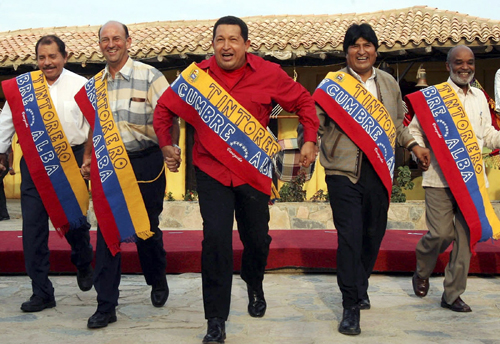 Venezuelan President Hugo Chavez and his Latin American allies wrapped up their summit here late Sunday with promises of closer economic integration after Venezuela offered its leftist friends guarantees of cheap energy supplies.
Chavez and his guests, Presidents Evo Morales of Bolivia and Daniel Ortega of Nicaragua as well as Cuban Vice President Carlos Lage, signed a series of agreements creating three new joint cooperation councils designed to strengthen cooperation within the Bolivarian Alternative for the People of the Americas.
They also agreed to broaden cooperation in the energy sector and dedicate more time to development of alternative sources of energy.
The agreements came after Chavez offered to sell his allies oil at a discount of 50 percent, a price break that he said would help their economic and social development.
"In the past, oil contributed to the development of the United States," the Venezuelan leader said. "Now it is time to make oil serve the development of our people. Venezuela is putting its oil reserves at the service of Latin America."
A leading member of the Organization of Petroleum Exporting Countries, Venezuela planned to produce this year about three million barrels of crude a day. Half of this amount is being sold to the United States.
Venezuela is already selling oil to Caribbean countries at a 40 percent discount.
A fierce critic of the United States, Chavez has been trying to forge anti-U.S. alliances throughout Latin America and the world at large, taking aim in particular at U.S. plans to create a free trade zone in the Americas.
World crude prices surged Friday amid reports of new arrests in Saudi Arabia of alleged militants plotting airborne attacks on oil facilities and army bases.
New York's main oil futures contract, light sweet crude for delivery in June, rose US$1.40 to close at US$66.46 a barrel.
The Barquisimeto summit of the Bolivarian Alternative for the People of the Americas was billed as a new bid to bolster their "anti-imperialist" alliance.
Also taking part in the talks as observers were Haitian President Rene Preval and Ecuadoran Foreign Minister Maria Fernanda Espinosa.
According to Chavez, Haiti will also be eligible for the 50-percent discount.
In his speech, Ortega vowed to spare no effort to "put an end to imperialist and capitalist domination" in the region.
Lage, for his part, emphasized the importance of political integration over joint economic projects.
"We seek integration among our people rather than among our markets," the Cuban official said.
Morales blasted U.S. plans to unite all countries of the Western Hemisphere in a free trade zone, calling instead for "fair trade that allows countries to solve their economic problems."
The Bolivarian Alternative was launched in 2004 by Cuba and Venezuela. Bolivia joined it last year and Nicaragua in January.
In addition to trade, members are focusing on development, education and health projects.
"The Free Trade Area of the Americas is dead," Chavez told his guests, referring to the U.S.-backed project. "Meanwhile, the Bolivarian Alternative has consolidated and will continue to grow."
Chavez also revealed that he had received a letter from Fidel Castro, in which the ailing Cuban leader had praised China's "market socialism" and predicted that this approach will make China the 21st century's superpower.
"The socialism of the 21st century must adapt to conditions of the 21st century," Chavez said of Castro's nine-page letter.