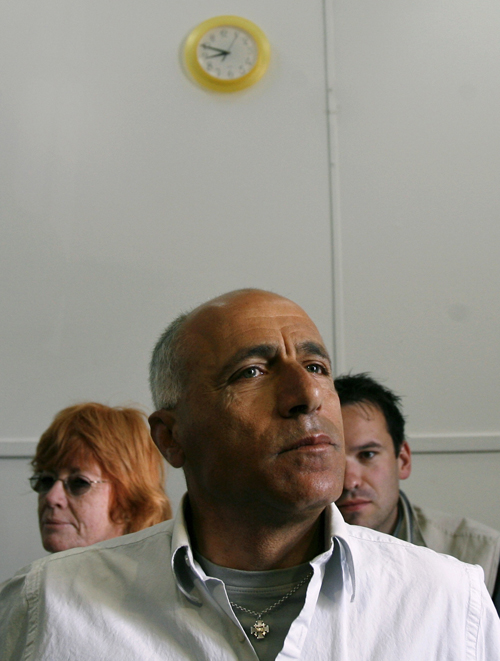 An Israeli court yesterday convicted former nuclear technician Mordechai Vanunu, who in 2004 completed a prison term for spilling military secrets, of violating the terms of his release by speaking to foreign media.
The verdict could mean fresh jail time for Vanunu and hurt his fight to leave Israel in the face of a travel ban that the government, citing security concerns, has renewed annually.
Vanunu was sentenced to 18 years behind bars in 1986 after giving an unauthorized interview to a British newspaper about his work at Israel's Dimona reactor. The disclosures all but blew away the secrecy around an assumed Israeli atomic arsenal.
Since his release Vanunu has campaigned for the Jewish state to be disarmed while denying Israeli officials' charges that he has more secrets that he could divulge if allowed to emigrate.
"All that I want is to be free, to leave the country," Vanunu, 52, told reporters at Jerusalem Magistrate's Court.
The court found him guilty of giving a slew of interviews to international media outlets over the past three years, defying a government order on him to limit contacts with foreigners.
A sentencing hearing was set for May 18. Justice Ministry sources said prosecutors could seek to jail Vanunu anew. Vanunu's lawyer said his client would likely appeal the ruling.
"We should be clear here that Vanunu was convicted for the very act of speaking to non-Israelis, rather than the content of those conversations," attorney Michel Sfard said. "We do not consider this appropriate for a democracy in the 21st century."
Sfard said he had been told by Israel's Interior Ministry that the travel ban on Vanunu had been extended by another year, to April 2008, when it will again come up for review.
"I plan to meet with the interior minister on this issue, which we hope will be reconsidered," Sfard said.
Israel neither confirms nor denies having the Middle East's only atomic weapons under a policy of "strategic ambiguity." The monopoly has long aggrieved Arabs and Iran, which is now developing its own nuclear program - for energy, it says.
Vanunu was convicted yesterday of telling U.S., British, Australian and French media that Israel assembled hydrogen and neutron bombs at the Dimona reactor and was annually producing 40 kilograms of plutonium, enough to make 10 atom bombs. Those statements appeared to be a retread of Vanunu's 1986 interview with Britain's Sunday Times, for which he was jailed as a traitor.
Vanunu, a Jewish convert to Christianity, argues that by refusing international inspections Israel inflames regional tensions and risk a "second Holocaust." He has also said that the Jewish state has no right to exist.