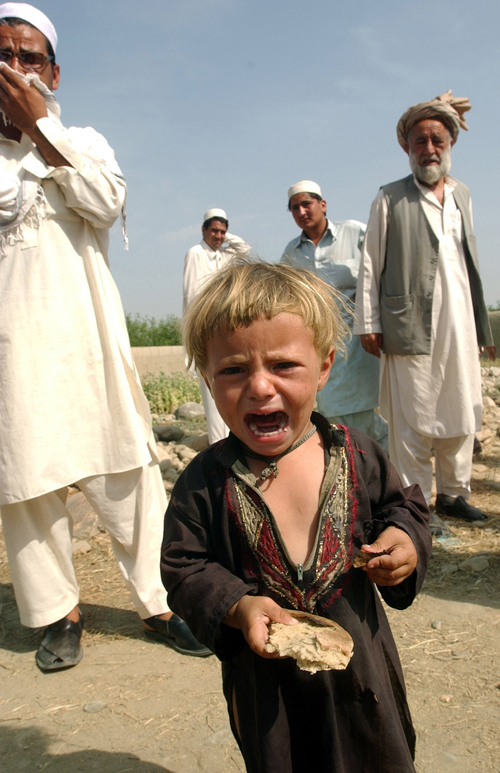 U.S.-led coalition and Afghan forces battled with Taliban insurgents over three days in western Afghanistan, leaving at least 136 suspected militants dead, a coalition statement said yesterday.
The clashes in Herat province were the deadliest reported in Afghanistan since January and sparked angry protests by hundreds of villagers yesterday.
Acting on intelligence about Taliban activity in Herat's Zerkoh Valley, coalition and Afghanistan forces attacked the insurgents and called in an airstrike, destroying seven Taliban positions and killing 87 fighters during a 14-hour engagement on Sunday, the statement said. Herat, bordering Iran, had been relatively safe until recently compared with the south and east, where the Taliban are most active.
Another 49 Taliban were killed two days earlier by a combination of gunfire and an airstrike, it said, adding that a U.S. soldier was also killed in the engagement.
'Death to America!'
The coalition statement said there were no reports of civilians wounded in the two battles.
But several residents told a Reuters reporter in the region that at least 20 civilians were wounded during police firing.
It was not immediately possible to confirm the casualty figures independently.
The bloodshed enraged local people. The deaths triggered an angry protest - the second in the country in two days - over what local villagers insist was the killing of civilians.
People gathered in front of the police station and government headquarters in Shindand district where Zerkoh Valley is located, chanting "Death to America!" said District Police Chief General Gul Aqa.
Aqa confirmed that the attack had killed "a large number of people" but did not have figure for the number of dead.
Police reinforcements were sent in to control the protestors and to block them from marching on the base.
Contrary to coalition claims, Aqa said the Afghanistan police and army were not involved in the clashes.
"The Americans carried out an independent operation in the Zerkoh," he said, adding that protesters were demanding to know why Americans did not inform Afghan forces beforehand.
Upsurge in violence
Shindand is a former Taliban stronghold where the majority of people are ethnic Pashtuns - the tribe from which the insurgents garner most of their support.
Recent weeks have seen an upsurge in violence in Afghanistan after a winter lull, with Taliban-led militants stepping up attacks, and coalition and NATO forces launching a series of offensives against around the country.
The clashes in Herat appear to be the deadliest in the once-stable west of the country since the ouster of the Taliban regime in late 2001. Most of the fighting has been concentrated elsewhere.
The fighting is also the deadliest reported nationwide since January, when NATO said that about 150 suspected Taliban crossing from Pakistan were killed by an airstrike and ground fire in the eastern Paktika province.