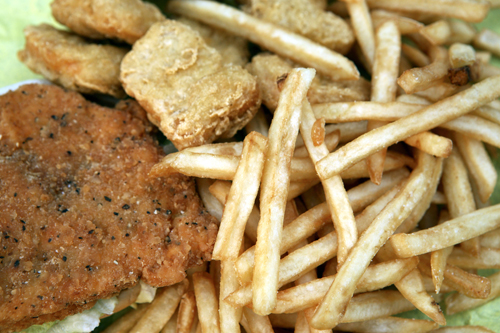 KFC's fried chicken buckets soon will be stamped with a health message along with the famous likeness of its founder, Colonel Harland Sanders.
The banner proclaims that its chicken has zero grams of trans fat per serving.
The Louisville-based chain announced Monday that all 5,500 of its U.S. restaurants have stopped frying chicken in artery-clogging trans fat. The company had said in October that it was switching to a new soybean oil believed to be less likely to cause heart disease.
"This idea is a positive one for consumers, and we do expect it's going to really appeal to people and bring them into our stores," said James O'Reilly, KFC's chief marketing officer.
Sister brand Taco Bell also said yesterday that its U.S. restaurants have completely switched to an oil with zero grams of trans fat. All 4,200 single-brand Taco Bells were converted to a canola oil, and all 1,400 multibrand locations switched to a soybean oil, the fast food chain said.
There are 23 Taco Bell items that contain no trans fat, including the chicken and beef crunchy taco, grilled steak soft taco, chicken and steak Gordita Supreme, and the chicken and steak Chalupa Supreme. Taco Bell said it is working to remove all trans fat from all its ingredients.
The two chains are subsidiaries of Louisville-based Yum Brands Inc., whose brands also include Pizza Hut, Long John Silver's and A&W All-American Food Restaurants.
The announcements come amid a national push to rid diets of trans fat. New York City and Philadelphia have required restaurants to phase out trans fat by next year, and bills to restrict or ban trans fat in restaurants or school cafeterias have been introduced in a number of states. Doctors say trans fat - listed on food labels as partially hydrogenated vegetable oil - can raise bad cholesterol and lower healthy cholesterol.
Other companies including Wendy's International Inc., Starbucks Corp., McDonald's Corp. and Burger King Holdings Inc. have also said they will phase out trans fat from their products.
KFC said the change in cooking oils will not change how its fried chicken tastes.
"We have safeguarded the recipe and the flavor profile," said Doug Hasselo, KFC's chief food innovation officer.
Hasselo said the new cooking oil costs more, but the chain will absorb the extra expense without passing it along to customers.
The zero grams trans fat items at KFC also include its potato wedges. Some of KFC's non-fried items still contain trans fat, including biscuits, pot pies, macaroni and cheese, and some desserts. The company said it's working to remove trans fat from those items.
KFC was unveiling television advertising Monday to promote its switch to cooking oil without trans fat. KFC stores will put up signs touting the conversion, and the chicken buckets will carry the health message within a week or two.
The company won praise from the Center for Science in the Public Interest, a consumer group that pushed for KFC to switch to a healthier cooking oil.
"To get rid of this one major problem improves their customers' health automatically, without the consumers doing anything," said Michael Jacobson, the group's executive director.