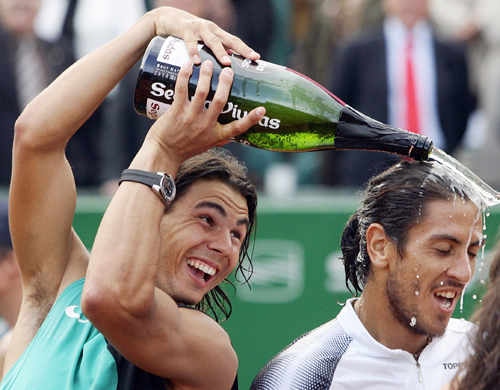 Rafael Nadal defeated Guillermo Canas 6-3, 6-4 on Sunday to become only the second player to win a third straight Open Seat Godo in its 55-year history.
Mats Wilander was the first, from 1982-84.
"To win another final at my home club is a great feeling," second-ranked Nadal said. "When I won the first it was like a dream, so to win it for a third time is an amazing feeling."
It was the 20th career ATP title for Nadal, who has won his last 12 clay tournaments, and an Open era record 72 singles on clay over more than two years.
He hasn't dropped a single set on dirt since top-ranked Roger Federer won the first set of their French Open final last year.
Back in action
Until he won the Masters title at Indian Wells in March, Nadal hadn't won a title in eight months. Now he's won three of his last four events.
"I've had some difficult moments like when I went eight months without winning a tournament," Nadal said. "Since Dubai (in March) I made a change in my game and the victory at Indian Wells was really important for my confidence."
Canas, playing his second straight final following the Sony Ericsson Open this month, had two break points in the first game but couldn't convert. They were his last break chances.
Double breaks
Nadal made the decisive break of the first set in the sixth game, sending a well-placed forehand out of the Argentine's reach.
In the second, Nadal broke in the seventh, and went on to join Wilander, Roy Emerson and Manuel Orantes as three-time winners at Barcelona.
"The difference were the two breaks," Canas said. "At least playing against Nadal at his best will only serve to help me reach a level that I would like to reach with my own game."
Nadal improved to 3-0 against Canas.
Doubles loss
He barely lost a bid to add the doubles title when he and countryman Bartolome Salva-Vidal, who received a wild card entry, lost to fourth-seeded Andrei Pavel of Romania and Alexander Waske of Germany 6-3, 7-6 (1) in the final.