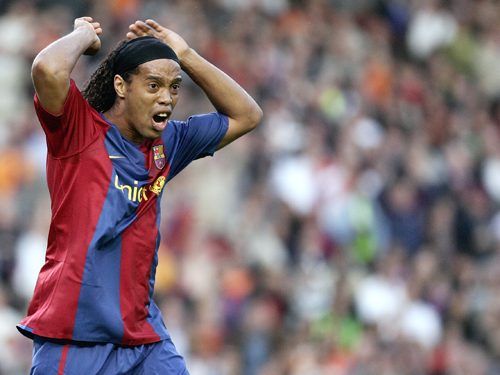 Barcelona coach Frank Rijkaard admitted on Sunday that he might have to curb some of Lionel Messi's inspired and mesmerising runs in order to save him from further injuries.
Three Levante players were booked for fouls on the Argentine teenage talent during the second half of Barcelona's 1-0 win over the struggling side from Valencia.
One of the trio of trippers, Alexis Suarez, was by common consent among Spanish pundits lucky to not be sent off after brutally hacking down Messi in injury time.
"He (Messi) is a player that's a pleasure to watch but we may have to think about altering some of the things he does to avoid the fouls he's suffering when he makes some of his individual plays," admitted Rijkaard.
Amazingly, Messi does not turning 20 until June 24.
The Argentine international has already suffered two injuries this season including breaking a bone in his foot in November which kept him out of action for three months.
"The only way to stop him is to foul him but I am not going to stoop to suggesting something so unsporting to my players," said Getafe coach Bernd Schuster in the wake of Barcelona's 5-2 win in the Spanish Cup two weeks ago.
On that occasion, Messi scored one goal which was reminiscent of Diego maradona's famous strike against England in the 1986 World Cup, going more than half the length of the field and around four defenders before scoring.
However, despite Schuster's admiration and ethics, there is the widespread suspicion that some other Spanish first division coaches might not have the same standards as the German who himself suffered from some suspect tactics during his own brilliant playing career.
Apart from Messi performing some of his now-commonplace miracles, Rijkaard was left with some mixed feelings after Sunday's narrow win which keeps them at the top of the Spanish first division by one point.
Barcelona are also on course for their third successive La Liga title.
"I'm not satisfied with the way we played but I'm at least happy with the result," remarked Rijkaard.