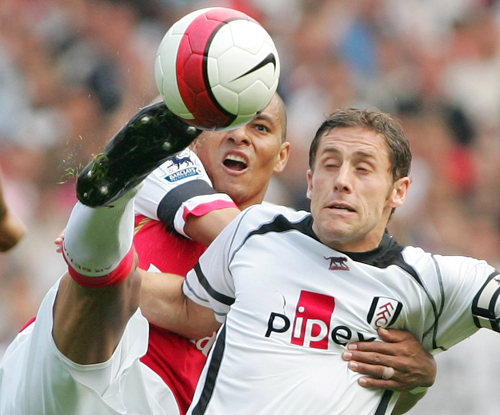 Arsenal scored twice in the last six minutes to secure a 3-1 home victory over Fulham that left their London rivals deep in relegation danger on Sunday.
Saturday's results had already guaranteed Arsenal a top-four finish and a place in the Champions League qualifiers but they are now only a point behind Liverpool in the battle for third - which brings only pride and some extra income.
Fulham remain fifth-bottom on 36 points, one point above both Wigan Athletic and West Ham United. Their last two games are at home to Liverpool and away to Middlesbrough.
Arsenal produced a performance that encapsulated their season - total domination marred by over-indulgent passing and a chronic failure to turn chances into goals.
It looked good after four minutes when Julio Baptista headed home a cross by Emmanuel Adebayor but though it remained one-way traffic they rarely threatened a second.
Fulham had plenty of the ball but did not manage an effort on goal until 12 minutes from time - when they scored.
Arsenal goalkeeper Jens Lehmann, perhaps bored by his lack of involvement, tried to claim a cross at the edge of his box but his poor punch went only to Simon Davies, who coolly lobbed it straight back in for the equaliser.
The goal raised Fulham's hopes but in their chase for an unexpected winner they were exposed to a classic Arsenal counter as Cesc Fabregas fed Adebayor to finish expertly and make it 2-1 in the 84th minute.
Gilberto Silva completed the scoring three minutes later with a penalty.