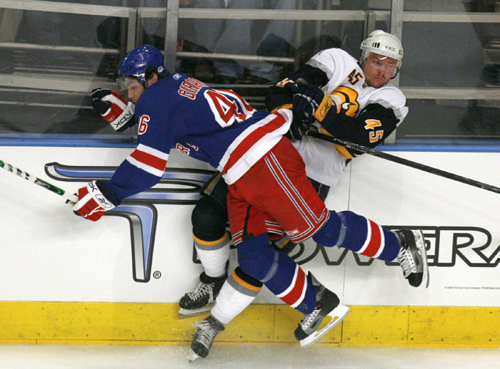 The Anaheim Ducks got the job done Sunday night almost in spite of themselves.
Despite handing the Vancouver Canucks eight power-play opportunities, including four in the first period and three more in the third, the Ducks pulled out a 3-2 victory at GM Place when right wing Corey Perry struck with the man advantage 7:51 into the third period.
Perry's timely goal, his second of the Stanley Cup playoff season, strong penalty-killing and clutch goaltending from Jean-Sebastien Giguere gave the Ducks a 2-1 series lead in the NHL Western Conference semifinal. Game 4 set for Tuesday night in Vancouver.
"We dug ourselves a ditch there," said Ducks left wing Chris Kunitz, whose screen in front enabled Perry's slapshot from high in the left-wing faceoff circle to slip between the pads of Canucks goaltender Roberto Luongo.
"Killing all those penalties really hurts your team for trying to get that push in the third period," Kunitz said. "We dug ourselves really deep. Sammy (Pahlsson) and those guys got tired. Lucky enough, we got the power play and scored."
The Ducks finished 2 for 5 with the man advantage, with defenseman Francois Beauchemin slapping in a loose puck from the side of the crease to provide a short-lived 2-1 lead at 9:45 of the second period. Vancouver got even on a Daniel Sedin goal at 14:31.
The Ducks took two minor penalties in the opening minute of the third period, but Vancouver failed to capitalize.
The Ducks, who had already wasted a third-period power-play chance of their own, needed only 11 seconds to capitalize after Canucks left wing Alex Burrows inadvertently shot the puck over the glass for a delay-of-game penalty at 7:40.
McDonald won the ensuing faceoff, defenseman Chris Pronger delivered a nice set up pass, and Perry took advantage of Kunitz's presence in Luongo's line of sight.
"We knew we had to get back to our style of game, get some traffic in front of the net and get in on the forecheck," Perry said, awarding the Ducks much higher marks in those areas than for their efforts in Friday's 2-1, double-overtime loss in Anaheim.
"I was looking for Mac on the far side, but I didn't see him," Perry said. "I knew Kooney was going to be in front. It was a great screen. I just shot the puck. Thank God it went in."
Perry also played a key role in the first Ducks goal, picking up Luongo's poor clearing attempt in the right-wing corner and feeding in front to linemate Dustin Penner, who filled a mostly open net 3:08 after the opening faceoff.
That accounted for the Ducks highlight portion of the first period. They managed only one other shot, a harmless bid from the right point by defenseman Joe DiPenta, while Vancouver peppered Giguere with 13.
The Canucks got even on their fourth power-play chance, with 47.2 seconds left in the first period, after Ducks center Ryan Getzlaf had flipped the puck out of play. Giguere moved out of his crease to deny wide-open Vancouver defenseman Mattias Ohlund from the slot, only to have the rebound carom directly to Markus Naslund, who tucked the puck in from the side of the net.
The Ducks were fortunate to have a chance to regroup at the intermission, with Giguere already having stymied the Canucks on a number of quality scoring chances.
"It would have been three or four to nothing without him," Ducks left wing Travis Moen said.
n Rangers hang on
Michal Rozsival fired from just inside the blue line 16:43 into the second overtime and lifted New York over the Buffalo Sabres 2-1 and shot some life into the Rangers' NHL season on Sunday.
Buffalo still leads the Eastern Conference semifinal series 2-1, but the Rangers can get even with a Game 4 victory today in Madison Square Garden.
Jaromir Jagr gave the Rangers a 1-0 lead in the second period, but the Sabres tied it late in the third when Daniel Briere finally took advantage of a slew of Buffalo power plays.
After that, it was a goaltending duel between Henrik Lundqvist and Sabres counterpart Ryan Miller. Lundqvist stopped 38 shots and became a winner when Rozsival, sore knee and all, beat Miller with the Rangers' 46th shot.
That was enough to snap the Sabres' six-game winning streak against the Rangers and their five-game run overall in the playoffs against New York's Islanders and Rangers.