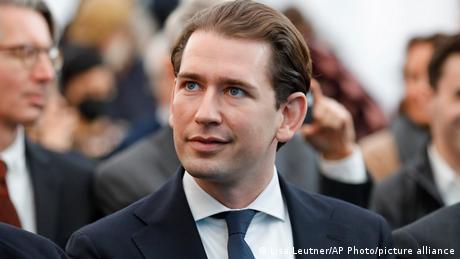 Conservative politician Sebastian Kurz, who stepped as Austrian chancellor down amid a corruption scandal last year, was announced on Sunday as the new co-chairman of the European Council on Tolerance and Reconciliation (ECTR).

The ECTR is an international NGO that describes its goal on its website as fighting "such evils as extremism, racism, antisemitism and xenophobia."

Other noteworthy co-chairmen of the group are former UK Prime Minister Tony Blair and former Spanish Prime Minister Jose Aznar — both of whom were in power when their nations joined the 2003 invasion of Iraq.

"We could not have found a better person to lead with passion, wisdom and determination against today's global challenges," he wrote.

Other noteworthy co-chairmen of the group are former UK Prime Minister Tony Blair and former Spanish Prime Minister Jose Aznar — both of whom were in power when their nations joined the 2003 invasion of Iraq.

Why did Kurz leave office?

Kurz resigned from the top job in October while facing allegations that he and other members of the Austrian People's Party misused public funds to help boost his political rise.

The 35-year-old denies any wrongdoing. He later announced his complete withdrawal from politics.

"It is a great honor to join such an important organisation which works against extremism and for greater tolerance across Europe," Kurz said in a statement issued by the ECTR.

During his time in office, Kurz made efforts to confront Austria's role in the Holocaust and placed himself firmly on the side of Israel in diplomatic affairs.

"Sebastian Kurz is widely known for his dedication in fighting all forms of antisemitism, terrorism, extremism and radicalization with a particular focus on preventing youth radicalization during his almost 10 years in leadership roles," the ECTR said.

What is Kurz's relationship with the far right?

During his political career, Kurz was also instrumental in forming a coalition with the far-right Freedom Party in 2017 — making Austria the only country in Western Europe to have a far-right party in government.

He also opposed the acceptance of refugees from camps in Greece as well as those fleeing Afghanistan after the Taliban came to power.

Since leaving office, he has joined the investment firm led by tech billionaire Peter Thiel whom many see as a far-right figure.