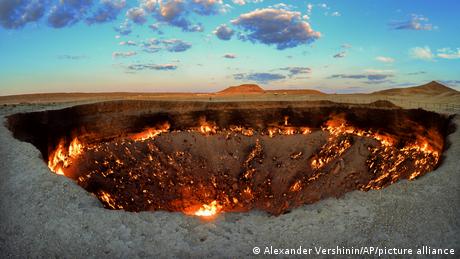 The site is a popular tourist attraction in the Central Asian country, and is known as the "Gates of Hell."

He said the natural gas fire "negatively affects both the environment and the health of the people living nearby."

In his remarks, he said, "We are losing valuable natural resources for which we could get significant profits and use them for improving the well-being of our people."

What is the 'Gates of Hell'?

Turkmenportal, a Turkmen news site, said the "Gates of Hell" first formed in 1971 when Soviet geologists hit a natural gas cavern in the large Karakum desert, causing it to collapse by accident.

To prevent the spread of natural gas, Soviet geologists started the fire mistakenly believing it would be extinguished in a short period of time.

Decades later, the "Gates of Hell" is still burning and has for decades, like the inferno it is named for.

In 2018, the president ordered it renamed "Shining of Karakum."

Has anyone tried to extinguish the 'Gates of Hell' before?

Berdymukhamedov had previously ordered the flames be extinguished in 2010.

Previous attempts to extinguish the "Gates of Hell" have not worked.

In 2019, Berdymukhamedov used an off-road truck to speed around the "Gates of Hell" for state television.