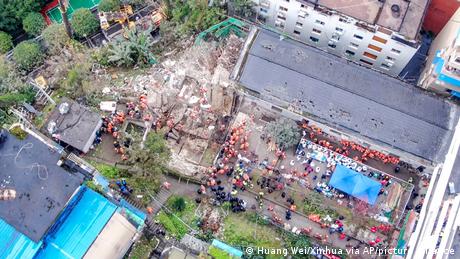 At least 16 people died in the southwestern Chinese city of Chongqing following a gas explosion in a municipal canteen, the Xinhua news agency reported.

The blast occurred in the city's Wulong district on Friday, causing the cafeteria to collapse.

According to Xinhua, ten other people were injured in the incident.

A gas leak is the suspected cause of the blast, the Chongqing city government said in an online statement.

More than 20 people were initially reported to be trapped in the rubble. However, all the victims are now believed to have been retrieved, Xinhua said.

Chinese broadcaster CCTV reported that one of the wounded was in critical condition in hospital.

The Ministry of Emergency Management dispatched a team of more than 600 people to the scene, CCTV said.

The Wulong district is known for its scenic karst rock formations.