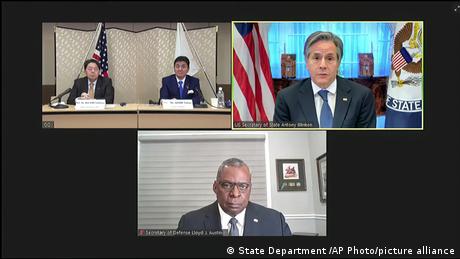 The foreign and defense ministers of the United States and Japan met virtually on Friday, voicing concern over China.

The two countries' representatives underlined the importance of the US-Japanese security alliance amid concern about Beijing's increasing regional assertiveness and repression within its own borders.

Two new deals to be signed

US Secretary of State Antony Blinken said the two countries reached a broad agreement on a new five-year deal over sharing the cost of the US military presence in Japan.

He also said Washington and Tokyo would sign a deal on research and development of defense-related technologies, including ways to counter threats from hypersonic weapons.

'More important than ever'

The Pentagon said the meeting reaffirmed the critical importance of the US-Japan Alliance as "the cornerstone of peace and prosperity in the Indo-Pacific region."

Washington was represented by US Defense Secretary Lloyd Austin and Secretary of State Blinken.

On the Japanese side were Defense Minister Nobuo Kishi and Foreign Minister Yoshimasa Hayashi.

Austin and Blinken said they were committed to continued close cooperation with their Japanese partners to modernize and strengthen the alliance.

In a nod to Chinese ambitions in the region, Minister Hayashi said it was "more important than ever" that Japan and the US were "united and show leadership" in the face of a number of challenges.

Blinken was cited by Japanese news agency Kyodo as saying it was important to remain wary of countries that seek to undermine the international rules-based order. The comments were thought to refer to China and North Korea.

"We're meeting against a backdrop of increased tensions and challenges to the free, stable and secure Indo-Pacific region that we both seek — challenges posed by North Korea's nuclear ambitions and by the coercive and aggressive behavior of the People's Republic of China,'' Austin said.

The delegates at the meeting "resolved to work together to deter and, if necessary, respond to destabilizing activities in the region," according to a joint statement that followed the talks.

They voiced "serious and ongoing concerns" about human rights issues in China's Xinjiang region, as well as in Hong Kong.

The statement also underscored the importance of peace and stability in the Taiwan Strait.