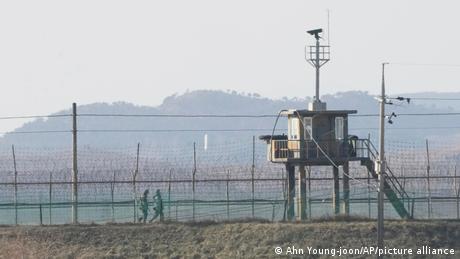 South Korea is awash with speculation as to why a North Korean who only defected to the South in November 2020 retraced his steps through the Demilitarized Zone on Saturday to return to the North.

Some defectors to the South say it is sometimes hard for others to understand the pressure that they are under as they try to settle into a new way of life that is completely different to anything they experienced previously.

One defector whose own aunt also returned to the North told DW that a longing to see the family she had left behind was the biggest motivation behind her decision, even if it meant that she was in danger of being punished by the regime of Kim Jong Un.

Media coverage of Saturday's "boomerang defection," as it is being described, initially focused on criticism of the military guarding the most heavily fortified border in the world for not stopping the man, who has only been identified by his family name, Kim, from reaching the North.

Defections via the Demilitarized Zone (DMZ) are rare. It is a 248-kilometer (155-mile) long, 4-kilometer-wide border, guarded by land mines, tank traps and combat troops on both sides in addition to barbed-wire fences.

South Korea's military has come under massive public criticism whenever someone manages to cross the DMZ undetected.

A 'grave' failure in surveillance

In response to the criticism, South Korea's military apologized Wednesday for causing public concern about its security readiness.

"I am really sorry for causing concerns to the people because of this incident," the chairman of the Joint Chiefs of Staff, Gen. Won In-choul, told lawmakers. "I promise to make every effort so there is no recurrence of similar incidents."

President Moon Jae-in called the incident a "grave" failure in surveillance that the military must not repeat. He ordered a special inspection of the military's overall security posture, according to his spokesperson, Park Kyung-mee.

In addition to criticism of the military, questions are being asked as to why the defector chose to go back to a country where life appears to be so much more difficult, at least from an outsider's perspective.

It has been reported that the man could only find work as a janitor and was struggling to make a living. The Unification Ministry, which has the task of putting all recent defectors through a course designed to familiarize them with life in the South, has stated that the man had received financial assistance, help in finding accommodation and a job, as well as medical care.

Yet, of the more than 30,000 North Koreans who have made the perilous journey to the South, at least 30 have chosen to return to their homeland in the last decade.

"The reasons are different for everyone who goes back," said Chan-yang Ju, who fled her home in Chongjin, in the far northeast of North Korea, in 2010. "Some people find holding a job here difficult, others have trouble adapting to the cultural differences, while some feel they are discriminated against."

While the 30-year-old Ju says she makes no effort to hide her own distinct North Korean accent, other defectors say it makes them the object of unwanted curiosity.

Her aunt was once told by a taxi driver to get out of his cab when he inquired about her accent and she informed him that she was a defector. Older people, in particular, have deep-seated reservations about the North, as many remember the bitter 1950-53 Korean War, she said.

The incident with the taxi driver was not, however, the reason why Ju's aunt chose to return to the North, despite family members who had also settled in the South pleading with her not to go.

"My father's older sister arrived in the South around 2015, but she left her only daughter behind in the North," Ju said. "She had been a doctor and was therefore an important person in North Korean society, and her daughter had also become a doctor and did not want to leave the North."

Ju's aunt initially had a difficult time settling in the South. To work as a doctor, she had to earn new qualifications but failed and was eventually forced to work in a restaurant. By 2018, she had made up her mind to go back, even though her own brother begged her not to leave, Ju said.

"We do not know much about her since she returned because it would be dangerous for her if we tried to contact her," Ju said. "But we have heard that she is being made to attend meetings and tell people that she defected to the South but that life there was terrible and so she came back. It's propaganda, but she has no choice now."

Casey Lartigue is the co-founder and joint president of Freedom Speakers International, a Seoul-based group that helps defectors learn English so they have better job opportunities. He says he has heard countless stories of the difficulties that defectors face after reaching what was perceived as some sort of paradise when they were still in the North.

"Even among North Korean refugees who happily escaped, sometimes there are family issues back home that can motivate them to return," he said. "Some refugees have been jailed in China after returning to check on children or relatives and almost been forcibly returned to North Korea," he added.

"There are other cases I have heard, such as North Korean refugees returning to North Korea to deliver money to relatives because they didn't trust brokers, to help a relative in trouble, or even try to bring out others who are afraid to escape on their own," Lartigue pointed out.

"Some might wonder why someone would return to North Korea, but it could be that new problems in South Korea might just seem like the latest bad thing to happen to them in their lives," he noted.

And for some, the response is to go somewhere that at least feels familiar.