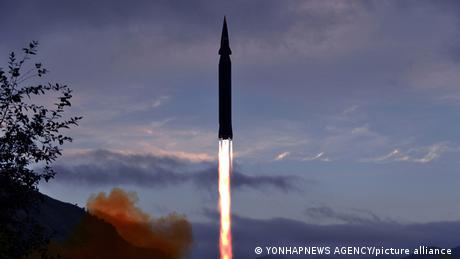 The North Korean state news agency on Thursday said a missile fired into the sea off the east of the Korean Peninsula was a hypersonic weapon.

It's Pyongyang's second reported test of a hypersonic gliding missile to date — after one it claimed in September — and is the first missile launch from North Korea since October.

What did Pyongyang say?

The Wednesday test "reconfirmed the flight control and stability of the missile in the active-flight stage and assessed the performance of the new lateral movement technique applied to the detached hypersonic gliding warhead", the agency said.

"The successive successes in the test launches in the hypersonic missile sector have strategic significance in that they hasten a task for modernizing strategic armed force of the state," the KCNA report said.

North Korea's claim of a successful hypersonic test Wednesday has yet to be independently confirmed.

Resolutions by the United Nations Security Council ban all ballistic missile and nuclear tests by North Korea, and sanctions have been imposed over the programs.

What's so important about hypersonic weapons?

Wednesday's missile launch into the Sea of Japan was detected by several militaries in the region and drew criticism from the United States, South Korea, and Japan.

Hypersonic missiles can achieve more than five times the speed of sound (about 6,200 kilometers per hour, or 3,850 miles per hour) and are more agile than standard weaponry.

Unlike ballistic missiles that enter space before returning to their targets on steep trajectories, hypersonic weapons travel at lower altitudes and can be maneuvered to make them more difficult to intercept.

The development of more maneuverable missiles and warheads is likely aimed at thwarting missile defense systems used by South Korea and the United States. The US is currently spending billions of dollars on upgrading its missile defense capabilities.

Washington condemned the launch and called on Pyongyang to sit down for talks.

"This launch is in violation of multiple UN Security Council resolutions and poses a threat to the DPRK's neighbors and the international community," a State Department spokesperson said, using the official name of North Korea.

Dialogue between the US and North Korea has stalled after talks in 2019 between leader Kim Jong Un and then President Donald Trump collapsed.

The administration of Trump's successor Joe Biden has repeatedly declared its willingness to meet North Korean representatives, saying it would seek denuclearization.

However, Pyongyang has so far refused to accept, accusing Washington of pursuing "hostile" policies.

South Korean President Moon Jae-in said in his New Year's address that he would continue to seek ways to promote peace on the Korean Peninsula until his single five-year term ends in May. He has recently urged a symbolic declaration to end the 1950-53 Korean War, to reduce animosity.

However, despite sanctions and major economic problems in North Korea caused by the COVID pandemic and mismanagement, Kim has since threatened to enlarge his nuclear arsenal.