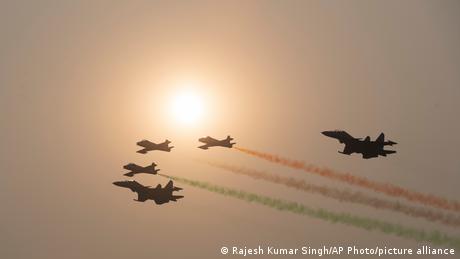 On December 24, an MiG-21 aircraft of the Indian Air Force crashed in the western state of Rajasthan during a training exercise, leaving one pilot dead.

The incident was the latest in a series of crashes in the year 2021 — one of the deadliest for Indian military aviation.

The crash also came weeks after the country's first chief of defense staff, General Bipin Rawat, was killed in a helicopter crash.

While the cause of the crash involving the general is still being determined, the December 24 accident saw the fifth MiG-21 jet go down in 2021.

The air disaster has once again brought the issue of obsolete military equipment into focus and triggered a discussion about Indian military modernization.

How is the process going?

Defense experts say that the changing geopolitical situation and the security landscape of the Indian subcontinent have prompted the Indian government to accelerate military modernization.

"Since last year, we have seen this sudden jump in modernization because of tensions with China and the ongoing Ladakh standoff and, of course, the constant engagement with Pakistan," Amrita Jash, an assistant professor at the Department of Geopolitics and International Relations, Manipal Academy of Higher Education, told DW.

Bharat Karnad, a national security expert and emeritus professor at the Center for Policy Research, said that the modernization program was not well thought-out.

"Military modernization in India has always been a helter-skelter process, which only vaguely conforms to prospective plans drawn up by the concerned services' directorates," he told DW.

What are the challenges?

Experts say that one of the biggest challenges confronting India's military modernization is the defense budget. In 2020, India's defense budget stood at around $68 billion (€60 billion), while that of China amounted to about $178 billion.

"Modernization is ultimately a function of the financial resources made available to the military," Karnad stressed.

"The one singular problem in India's case is that the payroll expenditure for a manpower-intensive Indian army, in particular, is going through the roof," he said.

"Consider this: the army took up fully 56% of the 2020-2021 budget or $38 billion, of this only 18%, or approximately $7 billion, was allotted for capital expenditure, which is for the procurement of modern armaments and spares. $7 billion doesn't buy much military modernization these days," Karnad explained.

A key reform towards modernization, backed by Prime Minister Narendra Modi's government, aims to integrate the capabilities of the army, the navy and the air force.

The current 17 single-service units are to come under five "theater commands" to establish a unified approach to deal with future conflicts.

Jash said the reform is vital to the modernization process.

"Modernization is not just about the weapons, the platforms, and the equipment, because now we are also talking about theaterziation of commands, bringing in all three elements," she said.

"China has already moved into theaterization and India is still in the talks for theaterization. Right now, modernization should lead to theaterzation," she noted.

In 2020, a report from the Comptroller and Auditor General of India (CAG) on Siachen — the world's highest battleground in the Himalayas — had highlighted a shortage of much needed military gear.

There have been several such reports of shortages and equipment becoming obsolete in the last decade.

"Among old weapons platforms still in service, the most conspicuous is the MiG-21 Bison in the Indian Airforce Fleet, which is being phased out," Karnad said.

Regarding the reasons why the aircraft is still in use, analysts say that because of the lack of money for acquiring new jets, the aviation units of the army and the navy cannot all be modernized at once. Some say that authorities need to have clarity on what type of jets India needs.

"Right now, our biggest problem is that we don't have stealth aircraft. Secondly, we just got the Rafale [fighter aircraft], but the track record of MiG continues. On the one hand, we are talking about bringing in Rafale, and on the other, we are also seeing the devastating nature of the MiGs. There needs to be a balance," Jash said.

Furthermore, there needs to be increased focus on cyber and network centric warfare, experts stressed.

"Fatal shortcomings, as compared to the Chinese People's Liberation Army, are probably in the spheres of cyber warfare and impenetrable strategic and battlefield communications systems, where the deficiencies are, if anything, widening," Karnad said.

India is currently one of the world's top five arms importers. But Modi's government has laid greater emphasis on producing and procuring weapons and military equipment locally.

"The recent purchases that India has made show a strategic shift in thought process. Now, we are very calculative in our procurement," Jash said, pointing to last year's acquisition of ultralight howitzer artillery guns from the United States.

"India is trying to balance the shortcomings out with indigenization of defense equipment. Be it INS Vishal or INS Vikramaditya, indigenization is the only response now along with balancing it out with the right kind of foreign arms," said Jash.