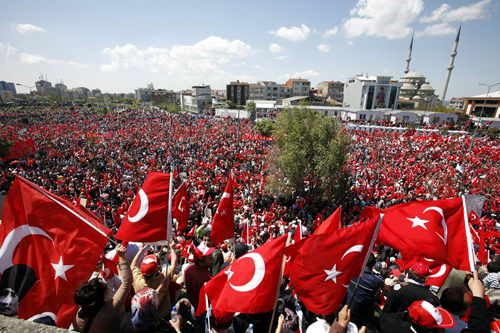 Hundreds of thousands of pro-secular Turks flooded central Istanbul yesterday to demand the resignation of the government, which they fear is leading Turkey toward Islamic rule.
The demonstrators, who numbered at least 300,000 according to police and up to 1 million according to local media, took to the streets following a sharp rise in tension between Prime Minister Recep Tayyip Erdogan's government and the country's powerful pro-secular military, which accuses the government of tolerating or encouraging radical Islamic circles.
"Turkey is secular and will remain secular," shouted thousands of flag-waving protesters, many of whom traveled to Istanbul from across the country overnight.
The demonstrators sang nationalist songs and demanded the resignation of the government, calling Erdogan a traitor.
The packed meeting area in the Caglayan district was a sea of Turkey's red-colored star and crescent flag, which was draped on people like capes and fluttered from cars, motorcycles and buildings.
The rally came a day after Erdogan's government rejected the military's warning about the country's disputed presidential election and called it interference that is unacceptable in a democracy.
The ruling party's candidate for president, Foreign Minister Abdullah Gul, failed to win a first-round victory Friday in a parliamentary presidential vote marked by tensions between secularists and the pro-Islamic government. Most opposition legislators boycotted the vote and challenged its validity in the Constitutional Court.
The military said Friday night that it was gravely concerned and indicated it was willing to become more openly involved in the process - a statement some interpreted as an ultimatum to the government to rein in officials who promote Islamic initiatives.
Some said Parliament Speaker Bulent Arinc was an enemy of the secular system, because he said the next president should be "pious."
The ruling party has supported religious schools and tried to lift the ban on Islamic head scarves in public offices and schools. Secularists are also uncomfortable with the idea of Gul's wife, Hayrunisa, being in the presidential palace because she wears the traditional Muslim head scarf.