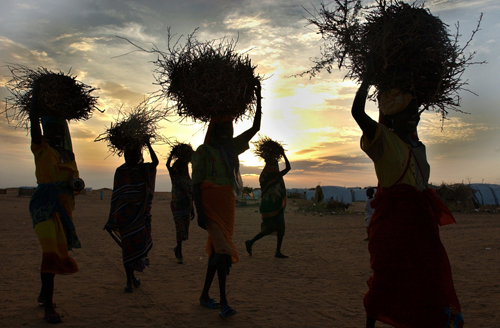 Adam Ibrahim was born at this refugee camp 25 years ago, after his parents fled what is now called Eritrea. He never saw his home country and thinks his own children may be born as refugees.
"That is if I survive here in the first place," he said.
Like many other refugees, he believes other more recent humanitarian crises, notably Darfur in western Sudan, have distracted the world's attention from his people's plight.
"The world has forgotten us," he said, clad in a Brazilian soccer jersey and surrounded by scores of refugees who came to complain about the dismal standards of basic services to the visiting head of the United Nations refugees agency.
Wars, famines and worsening human rights situations have forced hundreds of thousands of people to flee their homes in Eritrea, Ethiopia and Somalia to eastern Sudan since 1968.
The United Nations says some 133,000 refugees, the majority of them Eritreans with small numbers of Ethiopians and Somalis, live in 12 camps in eastern Sudan. Thousands of them, however, lack proper refugee status, and thus full rights.
They all live in small straw huts in vast areas surrounded by barren lands and bare hills in the province of Kasala, whose leaders say the influx of refugees has depleted the resources of their towns and villages.
"They are forgotten people, both the refugees and the hosting communities," the U.N. High Commissioner for Refugees Antonio Guterres said at the Kilo 26 camp on Thursday.
"I think it is important to recognize that the hosting communities have been sharing their very meager resources in a very generous attitude, and let's be honest, without much support, even from our side," he said.
Less publicity, less aid
Aid workers say donors have been less enthusiastic about funding the decades-old humanitarian operation in eastern Sudan, opting to focus more on areas like Darfur, where a four-year-old conflict has displaced some 2.5 million people and where media coverage is more high profile.
Guterres inspected a small compound that passes for a clinic, where patients lie in sweltering heat and drugs for disease like malaria are running short.
Many refugees said health services were dismal.
"Look around you. If all these people are medically tested, I swear to God you will not find a single guy who is healthy," said Ibrahim, standing behind a fence as police barred him and other refugees from meeting Guterres.
Another man, who arrived in 1981 fleeing violence between separatist groups and the Ethiopian occupation, gave a rundown of other problems.
"We suffer from unemployment," he said, giving his name as Mohamed. "In 30 years here, nobody here made it to university." Other refugees around him were shouting "Medicine! Water!"
Guterres said the agency would boost funding for eastern Sudan refugees and find durable solutions that would help the refugees generate income as long as large-scale repatriations remained unfeasible.
"The main concern now is first of all to improve the most appalling, negative living conditions here, and second to see better opportunities for self-reliance," he told reporters.
He said one of the solutions was to help the refugees farm land and gain access to the local labor market.
No going back
The United Nations says a 2000 peace agreement between Asmara and Addis Ababa led to the repatriation of some 98,000 Eritrean refugees, and improved relations between Sudan and Eritrea helped bring more stability to the region.
Yet ongoing violence between Ethiopia and Somali Islamists, along with what the U.N. describes as the worsening human rights situation in Eritrea have forced thousands of new refugees to flee to eastern Sudan.
Scores of those huddled on a straw mat at a camp for newly-arrived refugees near the Eritrean border tell Guterres stories of long journeys on foot to reach Sudan.
One Somali said he escaped the violence in his country to Ethiopia, where he was denied refuge. "They said 'there is no war in your country'" the man told the visiting U.N. official.
"But we look around and see bombings. We could not go back."