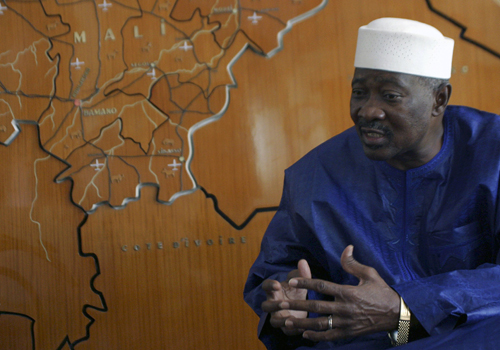 The thatched roof of the debating chamber in some Malian villages is set deliberately low to prevent elders standing up and coming to blows when they disagree.
From mud hut settlements on the edge of the Sahara to the seat of government in the capital Bamako, consensus politics has deep roots in Malian tradition and presidential elections held yesterday are no exception.
Incumbent Amadou Toumani Toure, who himself has no party political affiliation, has presided for the past five years over a consensus government which includes more than 30 parties: old rivals as well as friends.
"In terms of its mentality, in terms of its universal values, Mali is a very consensual country," Toure told Reuters in an interview at his palace, perched on a hill overlooking the capital.
"No elected leader, whoever wins, could manage Mali alone ... Western, combative democracy would not be a good solution because it risks falling back on factions, on ethnicity," he said.
Malians proudly declare their system unique in Africa, a continent where the dominance of one political "big man" is more often associated with dictatorship and repression.
Toure's main challenger in yesterday's polls, national assembly president and former Mali Prime Minister Ibrahim Boubacar Keita, belongs to a party represented in Toure's government.
Some opposition politicians say the system stifles debate. The eight candidates standing on Sunday have all broadly campaigned along the same lines: improving basic infrastructure in one of the world's poorest nations.
Tolerance
But its advocates argue the reverse.
"Mali has had 17 years of successful democratic development so who are we to criticize, to say not having a two or three-party system as in the West doesn't make for lively political debate," said one Western diplomat.
"In fact the opposite is true. There are many models of democracy and the Malians have chosen a road which works very well for them," said the diplomat, asking not to be named.
Bamako, a city of mango tree-lined avenues on the banks of the Niger river, was founded by three families from different backgrounds who worked together to build a trading center here in the 17th century.
The first were the Niares, animists who were soon joined by the Toures, Moorish Muslims from the north.
The two families intermarried before being joined a generation later by the Draves, desert dwellers from the rugged Adrar des Iforhas mountains northeast of Timbuktu.
"Our stability is because we agreed to share," Baba Titi Niare, 84, the oldest living descendant of the settlers, said in an interview late last year.
Many Malians see their country's social cohesion and stability as deriving from the founding families. Their descendants remain among the city's most respected men and a source of counsel for the president.
Mali has seen two coups since independence from France in 1960, one of them led by Toure who quickly restored civilian rule. But it has generally avoided the instability that has racked many of its neighbors.
Pragmatic debate
The unusual political system means the "big man" egos and ethnic rivalries all too often the hallmark of African elections have been conspicuous by their absence during Mali's campaign.
Instead the debate has focused on matters which directly affect the lives of its people, many of whom are farmers living hand to mouth on some of the most inhospitable terrain on earth.
Toure boasts of a strong record during his first term, mechanizing agriculture - Mali now has more tractors than any other country in West Africa bar Nigeria - and building roads to get produce to market.
His pledges have been measurable and relevant, such as promising to lift cereal production to 10 million tons from 3 million over the next five years, and have left his opponents struggling to differentiate themselves.
"He has built roads, bridges, he has brought water to villages," said Moussa Guindo, 26, an electrician who has lived all his life in Bamako.
"And if things in the villages don't work, this city won't work either. The capital depends on people and produce from the countryside."
Bakary Koniba Traore, a former finance minister and opponent of Toure's, said the president was taking credit for development projects already in place before he took office and could have done more.
But Toure's supporters say such comments are the last resort of opponents who have little else to propose.
"There can be a debate about the quality of the sauce, but at least our candidate provides food to eat," said Toure backer and Commerce Minister Choguel Maiga.