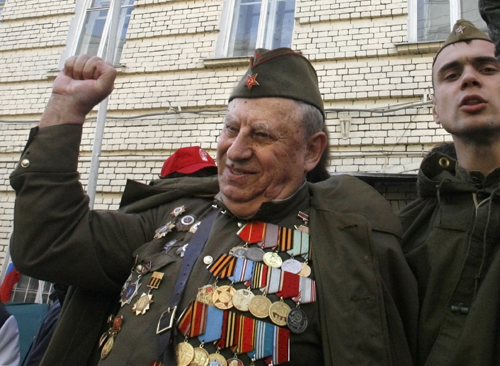 Estonian police detained more than 200 people overnight Saturday in the third day of unrest after the government's decision to remove a Soviet war memorial in downtown Tallinn.
Police said the night was much calmer in Tallinn, with no looting, as officers moved more assertively to break up any sign of impending trouble, detaining 150 people for various offenses.
In Narva, a town on the Russian border mainly consisting of ethnic Russians, police said they detained 50 people in an attempt to prevent an aggressive crowd, mainly teenagers, from causing violence. Minor incidents and detentions were reported in two eastern towns as well.
In all, some 1,000 people were detained in three nights of rioting - the worst the Baltic state has seen since gaining independence in 1991. One person was killed, 156 were injured - including some two dozen police - and numerous shops, offices and homes were damaged, police said.
To stem the violence, police on Saturday launched a campaign to take on "police assistance" volunteers, and by early yesterday some 500 Estonians had offered to help, police said.
The violence started on Thursday when the government sealed off and later removed a World War II statue - dubbed the Bronze Soldier - in downtown Tallinn erected in 1947 to honor Red Army soldiers. A grave believed to contain 15 Soviet soldiers is located at the foot of the monument.
Estonia's Russian-speaking minority - about one-third of the population - regard the statue and grave as a shrine to Red Army soldiers who died fighting Nazi Germany. Many ethnic Estonians, however, consider it a painful reminder of five decades of Soviet occupation.
Prime Minster Andrus Ansip appealed for calm, and decried the behavior of those who were rioting.
"I'm sure that the hooligans' attacks on everything we hold dear - our children's' safety, our memories, our homeland - will only further unite us," Ansip said in a televised address Saturday night.
A war of words between Estonia, which gained independence from the Soviet Union in 1991, and Russia, has erupted over removal of the monument and the resulting violence.