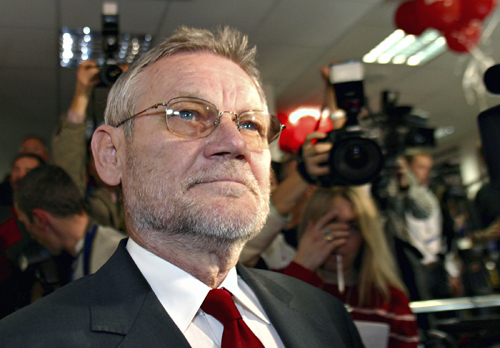 Croatia's former prime minister Ivica Racan, who allowed the first free elections in 1990 and set his country on the road to European Union membership, died of cancer yesterday aged 63.
Racan died in hospital after kidney cancer diagnosed in January spread to his brain, his Social Democratic Party said in a statement.
Racan resigned from all party functions this month as his cancer advanced and urged the party to choose a new leader, which they will do at a convention in June.
The SDP is running neck and neck in opinion polls with the ruling conservative HDZ ahead of an election due in November.
"In the short term, this is certainly bad. They are entering the election race without a leader and even when they appoint a new one, he will hardly have time to form a completely new team," said political analyst Davor Gjenero.
Racan was born in Nazi Germany where his parents were sent to a concentration camp as enemies of fascism. His father died there while his mother was taken in by a local German family, on whose farm Racan was born.
He ditched a lifetime of communism in 1990 to usher in free elections that overthrew Yugoslav communist rule. His renamed former communist party was unpopular and sidelined as rightwing nationalists held on to power throughout the 1990s.
Pivotal figure
But Racan fought back and came to power in 2000 heading a center-left coalition that pledged to purge the government of rampant corruption and set it firmly on the path to international respectability and European Union membership.
That, in the eyes of many local analysts, made him a pivotal figure in modern Croatian history. However, he never enjoyed grassroots support in Croatia's conservative, Roman Catholic society unlike the more nationalist leaders.
Racan practically had to learn to walk and talk again after a disastrous car accident in the 1970s.
Unlike Croatia's first President Franjo Tudjman, who tried to conceal his condition from the public, Racan and the SDP reported every twist and turn of his battle against cancer.
"He was a man of compromise, but compromise was necessary to lead the country out of Tudjman's shadow," a close ally of Racan said recently.