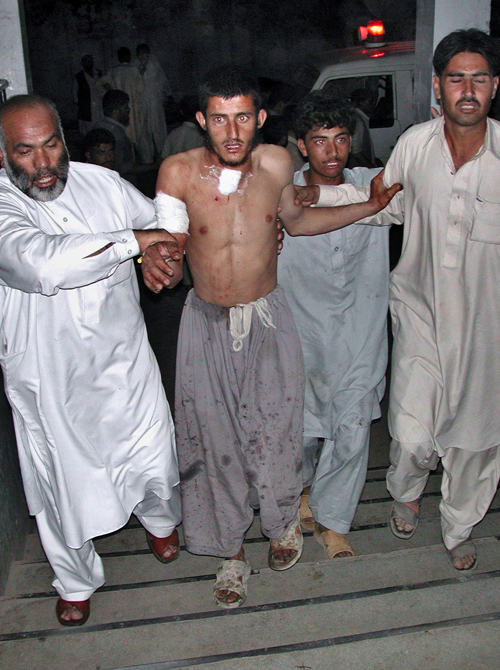 The death toll from the suicide bombing in Pakistan rose to 28 as investigators yesterday attempted to identify the bomber who tried to kill the interior minister in a plot that may have been hatched by Islamist militants.
The lone suicide bomber blew himself up on Saturday just three meters from the Interior Minister Aftab Ahmed Khan Sherpao in North West Frontier province bordering Afghanistan.
Sherpao, who was meeting people at the end of public meeting in Charsadda town, sustained minor leg injuries from shrapnel and pellets. Charsadda is about 20 kilometers northeast of Peshawar, capital of NWFP.
Investigators found the severed head and torso of the grey-bearded suspect and were trying to establish his identity.
"It is continuation of what is going on in our tribal areas and across the border in Afghanistan," Asif Iqbal Daudzai, Information Minister for the North West Frontier Province told Reuters.
A senior police investigator, Fayyaz Turu, said the bomber appeared to be in his 30s. "He is either an Afghan or belongs to our tribal areas," he said.
"The pattern of attack was similar to previous ones, all of which had links in our tribal areas," he said adding police were preparing a sketch of the suspect to help identify him.
He said the death toll had risen to 28 from 26 after two wounded men succumbed to injuries. He said around 52 people were wounded and several of them were in serious condition.
Pakistan has been plagued by bomb attacks by Islamist militants following President Pervez Musharraf's decision in 2001 to join a U.S.-led war on terrorism. There was a spate of suicide attacks earlier this year, including one in the capital, Islamabad.
Sherpao said he was target of the attack.
Afghan President Hamid Karzai, a fellow ethnic Pashtun, telephoned Sherpao soon after the attack to ask how he was.
One of Sherpao's aides and several of his security detail were killed. In Washington, White House spokesman Tony Fratto said the attack "shows the terrorists are out there as we saw from this activity in Pakistan but also from the roundup in Saudi Arabia."
Saudi Arabia said on Friday it had thwarted a plot to attack oil facilities and other installations and 172 people had been arrested.
North West Frontier province is one of the most volatile regions of Pakistan.
Al-Qaida and the Taliban have drawn support from the fiercely independent tribesmen of North West Frontier, particularly in North and South Waziristan, the poorest of Pakistan's seven semi-autonomous tribal regions.
A missile strike in Saidgai village in North Waziristan killed on Friday at least three suspected Islamists militants and wounded two others, according to an intelligence official.
Yesterday, a soldier was killed when suspected militants fired a rocket on an army post near Saidgai, intelligence officials said.