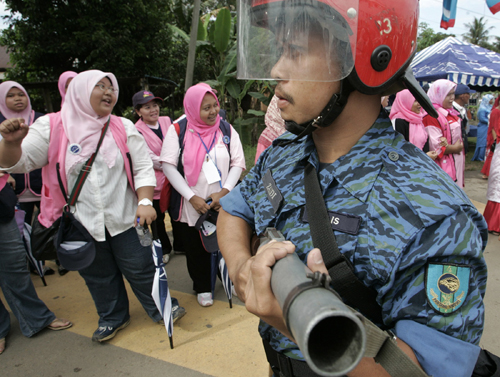 A Malaysian opposition party linked to former deputy leader Anwar Ibrahim disputed yesterday the ruling coalition's victory in a bitterly fought by-election, alleging electoral fraud and calling it an insult to democracy.
Malaysian Prime Minister Abdullah Ahmad Badawi's National Front trounced the People's Justice Party to retain the Ijok legislative seat in central Selangor state in Saturday's by-election. It had been seen as a test of support for both sides ahead of national polls, which are not due till 2009 but expected to be called by late this year or early 2008.
The Justice Party, which boycotted the announcement of the result, claimed it found irregularities and evidence of fraud, intimidation, bribery and cheating by the National Front, and would lodge an official protest against the election process.
The National Front coalition increased its majority from the 2004 general election, according to the Election Commission, capturing 58.6 percent of the votes. The Justice Party, headed by Anwar's wife Wan Azizah Wan Ismail, secured 40.1 percent of the votes, while the rest of the ballots were considered spoiled.
The result was a blow to Anwar, who is adviser to the party and seeking to revive his political career after being sacked from the government nine years ago on corruption and homosexuality charges.
The Justice Party said the strong police and government presence in Ijok created an atmosphere of fear while the 82 percent voter turnout, among the highest in a by-election, was suspicious.
"There were voters who arrived only to find their votes used by unknown persons. There are those who had passed away and yet their votes were cast. We have evidence of residents promised money by National Front after they voted for them," it said in a statement.
"This is not a defeat for our party. This is an insult to our democratic system."