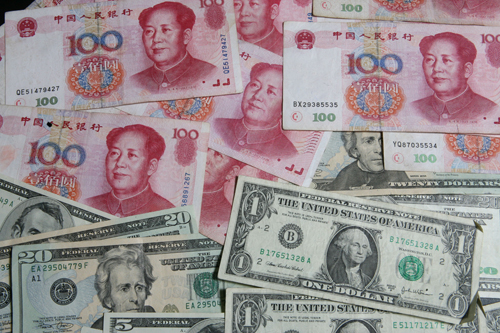 China ordered banks to set aside more money as reserves for the seventh time in 11 months to try to prevent the world's fastest-growing major economy from overheating.
Lenders must put aside 11 percent of deposits starting May 15, up from 10.5 percent, the central bank said on its Web site.
Premier Wen Jiabao is trying to stop a flood of cash from an export boom from fueling wasteful investment, inflation and a stock market bubble. China's benchmark share index has rebounded 41 percent after the Feb. 27 plunge that sparked a global equities rout.
"The next steps for the central bank are to raise interest rates and allow the yuan to appreciate faster, possibly by widening the trading band," said Huang Haizhou, an economist at Barclays Capital in Hong Kong. "The tightening so far has done little to curb liquidity."
Economic growth accelerated to 11.1 percent in the first quarter from 10.4 percent in the previous three months, driven by a trade surplus that almost doubled to US$46.4 billion.
Inflation reached a more than two-year high of 3.3 percent in March. Banks made 1.4 trillion yuan ($180 billion) of new loans in the first quarter, nearly half the total for last year.
Each 0.5 percentage point increase in reserve requirements removes about 170 billion yuan from the financial system. Local-currency deposits stood at 35.42 trillion yuan at March 31.
"They will do more," said Dariusz Kowalczyk, chief investment strategist at CFC Seymour Ltd in Hong Kong. "Raising interest rates is more effective in cooling growth and I think they'll raise rates again in June."
China has raised borrowing costs three times since April last year. The benchmark one-year lending rate is at an eight- year high of 6.39 percent. The central bank will raise rates two more times this year, according to a Bloomberg News survey of economists.
China's yuan is allowed to move 0.3 percent each day against the U.S. dollar and has gained 7.2 percent since a fixed exchange rate was scrapped in July 2005.
More flexibility would ease tensions with the U.S., where lawmakers accuse China of benefiting from an artificially weak currency that makes its exports cheap. Treasury Secretary Henry Paulson has resisted calls in Congress for sanctions while coaxing the Chinese government to allow a stronger yuan.
China's foreign reserves grew by US$1 million a minute in the first quarter, double the previous year's pace, on the export boom, foreign-currency swaps, and companies bringing home the proceeds of initial public offerings, economists said.
The reserve-ratio increase is aimed at curbing liquidity "but may not be as effective as raising interest rates," said Liang Hong, an economist at Goldman Sachs Group Inc. in Hong Kong. "Prices in the equity market will continue to rise."
China may raise rates three more times in 2007, Liang said.
The benchmark CSI 300 stock index is up 70 percent for the year after rebounding from the 9 percent one-day fall in February. The index set records on four days last week, then fell after the Financial Times said China's social security fund was cutting equity holdings.
"One major political risk of tolerating the bubble is that those investors who will be hurt the most by a major market correction are the poorest - and most vulnerable - ones who just entered the market over the past few months," Ma Jun, senior economist at Deutsche Bank AG in Hong Kong, said in a note this month.
Premier Wen Jiabao this month pledged stronger controls on investment in factories and property, lending curbs, and more efforts to rein in a trade surplus that last year reached a record US$177.5 billion.
China may face a fourth summer of power shortages as accelerating industrial production strains oil and coal supplies, the National Development and Reform Commission, the top economic planning body, said April 26.
Production rose 18.3 percent in the first quarter from a year earlier, compared with a 16.6 gain in 2006 as a whole. Fixed-asset investment in urban areas climbed 25.3 percent, up from 24.5 percent.
China has curbed land use, restricted project approvals and cut export rebates for steel and textiles.
While the central bank sells bonds to soak up cash, increasing banks' reserve requirements is a cheaper way of curbing the money supply. The People's Bank of China pays interest of 1.89 percent on reserves versus 2.976 percent for one-year bills sold last week.
The world's fourth-largest economy has grown by at least 10 percent for each of the past four years and the 10.7 percent expansion in 2006 was the biggest in 11 years.