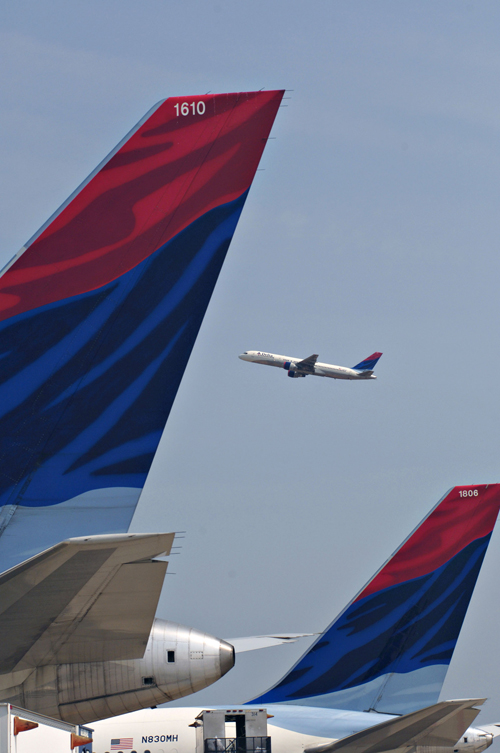 Delta Air Lines is set to emerge from 19 months of bankruptcy protection in another sign that one of the bleakest chapters for the U.S. airline industry may be coming to an end.
The third-largest U.S. carrier could exit Chapter 11 bankruptcy as early as Monday after a judge approved the final details of reorganization, leaving Delta with some US$2.5 billion in financing.
Delta and Northwest Airlines filed for creditor protection on the same day in September 2005, which at the time left four of the top six carriers in bankruptcy.
Since that time, the remaining carriers with the exception of Northwest have emerged from court supervision and the financial picture of the industry has markedly improved.
"This is an exciting day for everyone at Delta," said Gerald Grinstein, Delta's chief executive after winning court approval of the exit plan.
"Achieving a turnaround of this magnitude in little more than 19 months would not have been possible without the hard work and dedication of Delta people worldwide, and the leadership, the vision and the flawless execution of our plan by our outstanding management team."
Delta lost US$6.2 billion in 2006 amid a hefty US$5.4 billion charge for reorganization.
The carrier posted a much narrower US$130 million loss in the first quarter of 2007 but sees its financial picture improving after major cost-cutting efforts.
"Delta has fundamentally transformed into a thriving industry leader," said Grinstein.
"We are stronger - financially, operationally, and in spirit - and Delta is ready to return to its traditional leadership position in this highly competitive industry."
The U.S. airline industry has been struggling with its worst-ever crisis since the September 11, 2001 attacks triggered a slump in air travel, and carriers were hit with record-high fuel prices.
The Air Transport Association of America, a trade organization of the leading U.S. airlines, is projecting an overall net profit of approximately US$4 billion for passenger and cargo airlines in 2007 after earnings of between US$2 billion and US$3 billion in 2006.
A profitable 2006-2007 would be the first back-to-back period of profitability since 1999-2000. U.S. airlines lost a total of US$10 billion in 2005.
"In addition to a healthy revenue environment, U.S. airlines are seeing the results of painstaking, ongoing cost reduction efforts and balance-sheet repair," said ATA chief economist John Heimlich, who nonetheless said caution is warranted.
"Although the industry is optimistic and well positioned to move forward, the reality is that events beyond airlines' control could easily push them off course."
The traditional full service airlines such as Delta have been hurt by competition from low-cost startups like Southwest and JetBlue, which do not have "legacy" pension and health care costs and often have lower wages as well.
To streamline, Delta has trimmed some five billion dollars from operating costs compared to 2002 levels. This has included pay cuts amounting to one billion dollars, including concessions from pilots, and a reduction in the workforce from 66,500 in 2005 to 47,000.
Delta rejected a takeover bid last year from US Airways - which itself emerged from bankruptcy in a deal that merged with low-cost carrier America West - preferring to continue as a stand-alone company.
Standard & Poor's rating service said Delta's prospects are improving but that the airline will still have a low "B" credit rating.
"Delta's relatively rapid and successful reorganization should leave the airline with lower operating costs, improving revenue generation, and a reduced debt load," said S&P analyst Philip Baggaley.
"Still, the airline's credit profile and its anticipated 'B' corporate credit rating continue to reflect also risks associated with participation in the price-competitive, cyclical, and capital-intensive airline industry; on below-average, albeit improving, revenue generation; and on significant intermediate-term debt and capital spending commitments."
DELTA AIR LINES FACTBOX
Here are key facts and figures on Delta Air Lines, the third largest U.S. airline, set to emerge from 19 months of bankruptcy protection:
The airline traces its roots to Delta Air Service created in 1928 in Mississippi, founded by C.E. Woolman and with its inaugural flight on June 17, 1929. The chief executive since 2004 has been Gerald Grinstein.
Delta lost US$130 million in the first three months of 2007. In 2006 it posted a net loss of US$6.2 billion, including US$5.4 billion in reorganization costs.
Revenues for the first quarter were up 11 percent at US$4.1 billion. For 2006, turnover was up six percent at US$17.1 billion.
Delta has cut some US$5 billion from annual operting costs from a base in 2002, including concessions on pay and benefits from pilots and other employee groups.
Delta had a total of 47,000 employees at the end of April, including 6,000 pilots, compared with a workforce of 66,500 in October 2005.
The third largest U.S. airline, Delta serves some 307 destinations in 52 countries. In 2006, Delta increased international flights by some 20 percent and expects to continue the trend in 2007. Last year, Delta generated 35 percent of its revenues from international flights.
Overall, the airline served 106.8 million passengers in 2006, compared with 11 million in 2004.
Delta operates 475 aircraft, down from 535 in October 2005. It is set to receive 10 Boeing 757 jets this year and one Boeing 777 in 2008. Most of its planes are made by Boeing, with none coming from European manufacturer Airbus.