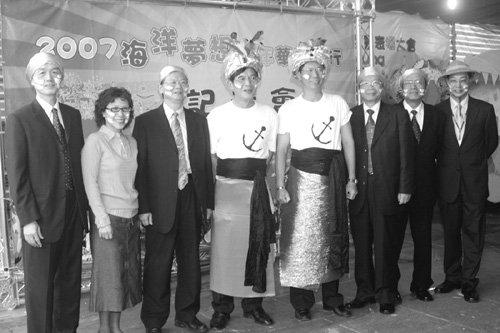 The 2007 "Ocean Fantasy Carnival," hosted by Yang Ming Line, drew thousands of people to the streets of Keelung Saturday to watch the parade of 43 troupes, some coming as far as south America.
Many of the performing troupes came from schools and communities outside the port city.
The parade concluded the 2007 Keelung Children Arts Festival, one of the cultural activities supported by the Yang Ming Group.
Picture shows Yang Ming Group chairman Huang Wong-hsiu, 4th from right, Acting Keelung Mayor Chen Chung-kwang, 4th from left, and others meeting the press at a news conference before the parade started.