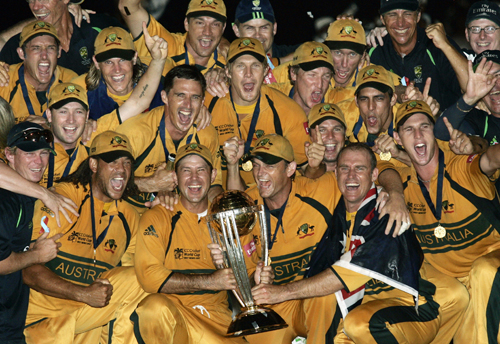 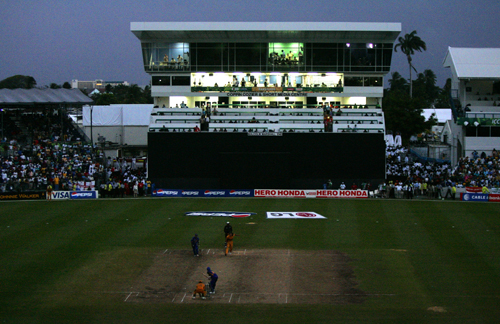 Australia won a record third successive World Cup on Saturday amid scenes of unprecedented confusion as night fell on Kensington Oval.
The Australians, who scored 281 for four from 38 overs, thought they had clinched the rain-reduced match when Sri Lanka needing 63 runs from three to win accepted the umpires' offer to go off for bad light.
As the Australians celebrated exuberantly while the scoreboard flashed "Congratulations Australia," umpires Steve Bucknor and Aleem Dar incorrectly told the teams they needed to complete the remaining overs or return on Sunday.
Australia captain Ricky Ponting and his Sri Lanka counterpart Mahela Jayawardene agreed that slow bowlers would bowl the remaining overs because it was so dark and the match finally ended with Sri Lanka 215 for eight and a 53-run victory to Australia.
The fiasco rounded off a trouble-strewn competition which was rocked early on by the suspected murder of Pakistan coach Bob Woolmer and has been criticized for being over-long and over-priced for local Caribbean fans.
Huge gulf
Australia, unbeaten in 29 World Cup matches since it lost to Pakistan in 1999, is the only team to win the tournament three times in a row. It was its fourth victory overall.
Australia coach John Buchanan, who quits his post after the tournament, said the gap between his team and the rest had been the difference "between night and day."
"Each individual strives for perfection all the time, from a coach's point of view that's a perfect team," he told a news conference.
Australian's win was set up by vice-captain Adam Gilchrist, who plundered a record 149 when play finally began 2-3/4 hours late. Gilchrist broke Clive Lloyd's record for the fastest century in a World Cup final and went on to better Ponting's record individual score of 140 not out at the 2003 final. He equaled the World Cup record of eight sixes in an innings, and he has also scored more than 50 in each of Australia's hat-trick of wins.
Gilchrist and Matthew Hayden (38) put on 172 for the first wicket, breaking the previous opening record of 129 in a final set by England's Mike Brearley and Geoff Boycott against West Indies in 1979.
Sri Lanka, the 1996 champion, made a spirited reply with Sanath Jayasuriya (63) and Kumar Sangakkara (54) adding 116 from 106 balls for the second wicket with some delightful strokes.
After their dismissals rain again swept across the Kensington Oval, stopping play for 12 minutes, and Sri Lanka's target was reduced to 269 from 36.
The Sri Lankans continued to go for their shots in the increasing gloom but wickets fell steadily and the game finally ended in total darkness with nobody on the ground able to figure out what was going on.
Glenn McGrath, playing his last match for Australia, began economically before Sangakkara ruined his figures with a six into the crowd followed by two fours.
His dismissal, a simple catch to Ponting at mid-on off Brad Hogg's left-arm spin, was the beginning of the end for Sri Lanka. Jayasuriya was bowled for 63 from 67 balls by Michael Clarke and a difficult task for the remaining batsmen was made impossible by the rain and dark.
Secret batting tool
Gilchrist credited a squash ball stuffed inside his glove for his success in Saturday's final.
Gilchrist hit 13 fours and eight sixes from just 104 balls and pointed to his glove as he celebrated the fastest hundred in the history of Cup finals.
"I was pretty pumped up," he told a news conference after being named the player-of-the-final. "I also had a little message, to wave to someone at home in Australia about something in my glove," he said.
"(It was) the guy (Bob Meuleman) who helps me with my batting at home," he explained. "I had a squash ball in my bottom hand in the glove that I use in training just to help with my grip.
"I decided I will use that in this World Cup in a match but hadn't.
"His last words to me before I left the indoor training center where I train with him in Perth were 'if you are going to use it, make sure when you score a hundred in the final you show me and prove to me you got it in there'.
"I had stayed true to that."