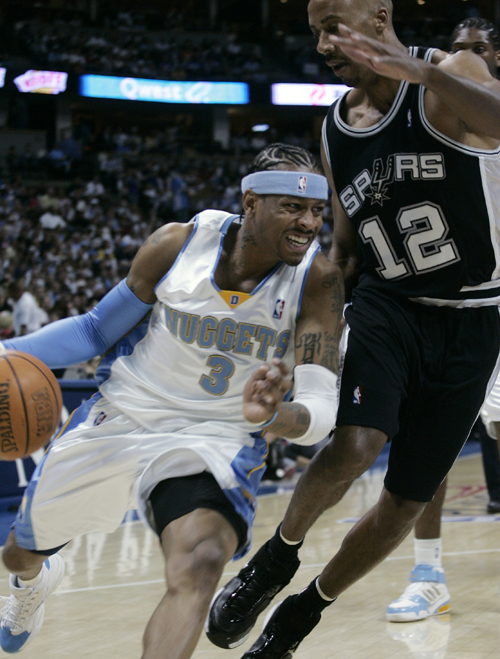 Allen Iverson never raised his eyes. He walked off the court and trudged down a quiet hallway, his eyes blank as he stared at the tile floor.
He had good reason for his gloom. A season is slipping away.
Iverson came to Denver to revive his career and his reputation. He came to prove he wasn't Allen the Anarchist. He was the magician with all the stupendous moves, sure, but he forgot how to win in his final years in Philadelphia.
The Denver Nuggets have no chance to topple the cool, crafty San Antonio Spurs if Iverson remains obsessed with self. He returned to his me-first ways in Denver's 96-91 loss Saturday night.
He missed 13 of 20 shots, ignored open teammates and reduced the Nuggets' offense to a smoldering mess. He finished with four assists, a number he must double if Denver wants to win this series.
"This series isn't over," Iverson said, showing his usual bravado. "We haven't lost any confidence."
Standing around
Maybe not, but the Nuggets have fumbled all momentum. After stifling the Spurs in Game 1, the Nuggets' attack withered in losses in Game 2 and 3.
Iverson must get his teammates involved. For nearly all of Saturday's game, everyone on the Nuggets except Carmelo Anthony and Iverson stood around and watched on offense.
They watched Iverson perform his wonderful dribbling tricks. They watched the yo-yo and the crossover and the behind-the-back. It was all very impressive if you believe basketball is based on style points.
This is not winning basketball. This is the brand of basketball that inspired the 76ers to dump Iverson.
The Nuggets will fail to beat the Spurs as a two-man team. Anthony and Iverson combined for 41 shots, more than half the Nuggets' total.
Nene pounded the Spurs nearly every time he touched the basketball, but there's one big problem. He didn't touch it enough.
He scored 18 points on only 11 shots, but often stood open in the lane, waiting for a pass, while Iverson performed his dribbling shows.
With 9:52 left, the team-draining version of Iverson was fully on display. He dribbled into the corner at the baseline, and found himself surrounded by Tony Parker and Tim Duncan. He had no chance for a decent shot, but shot anyway.
His off-balance shot barely caught the rim.
Breathing new life
But the series isn't over, and there's no doubt Iverson can turn into a versatile, dangerous force. He remains, even at the advanced age of 31 as quick as any player in the NBA, or anywhere else.
When his eyes are searching the court instead of staring at the rim, he's a deadly passer. He can breathe life into a stumbling offense.
Good Allen made a few appearances, most notably with 1:55 left. He whizzed past Parker on the baseline, forced Duncan to leave his feet and found Nene for a dunk.
Boom. Fans at the Pepsi Center were shouting and stomping at the sight of team-oriented basketball. All this generosity came a bit too late to save Saturday's game.
But it's not over. Hope flickers, even though it's getting late. If Iverson doesn't want to take another slow, lonely exit, he must start look around and find his lost teammates.
Detroit sweeps Magic
Chauncey Billups scored 25 points, Richard Hamilton added 19 and the Detroit Pistons overcame a lackluster fourth quarter to beat the Orlando Magic 97-93 and sweep the NBA first-round playoffs series on Saturday.
The 4-0 whitewash was Detroit's first in the playoffs since 1990, when the "Bad Boys" won a second consecutive NBA title.
The Pistons were ahead 78-69 early in the fourth, but missed 11 of 13 shots and found themselves trailing 85-80 with about three minutes remaining.
But the veteran team, which has advanced to four consecutive Eastern Conference finals, retook control.
Rasheed Wallace hit a 3-pointer that made it 85-83. Chris Webber followed with a hook shot in the lane. Then Billups and Hamilton took over, combining to score Detroit's final 12 points.
In other playoff games:
At Washington, LeBron James had his best game of the series with 30 points, nine assists and six rebounds for Cleveland in its 98-92 win over the Washington Wizards, leaving the Cavaliers one game away from sweeping a playoff series for the first time in franchise history.
At Salt Lake City, Mehmet Okur broke out of his scoring slump with 16 points, stifled Yao Ming defensively, and Utah evened its first-round series at 2-2 with Houston 98-95.