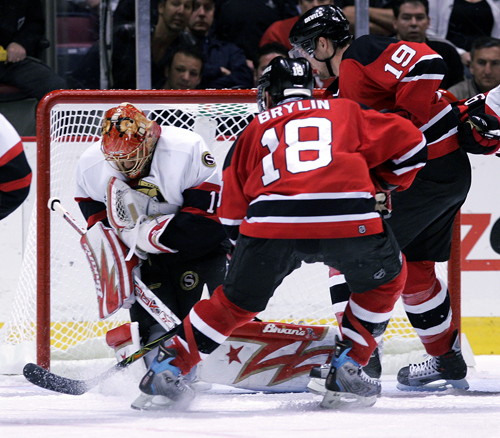 After allowing four goals on the first eight shots by the Ottawa Senators in a 5-4 loss Thursday, goalie Martin Brodeur felt he had to change a few things.
So he changed his glove. And his pads. And his blocker.
"Everything," said Brodeur. "It's the first time I've done it. Now I'll have to do it more often."
Normally a creature of habit, Brodeur gave the squeaky-clean equipment a test drive during the morning skate, suited up with the shiny gear and gave his New Jersey Devils new life.
In front of a full house (19,040) for the first time at home this season, Jamie Langenbrunner's breakaway goal 1:55 into the second overtime gave the Devils a 3-2 sudden-death victory in Game 2 at the Meadowlands on Saturday night. It evened the best-of-seven Eastern Conference semifinals at a game apiece.
Back from the brink
The Devils had stared many times into a potential 0-2 hole after blowing a two-goal lead, but Brodeur, who helped create Ottawa's tying goal by Dany Heatley with 26.7 seconds left in regulation, rescued them from that fate. As had happened in the Tampa Bay series, questions had been raised about Brodeur's aura of invincibility after Game 1, but Langebrunner said, "We don't worry about him. He can have his worst game and follow it up with one of his best."
Brodeur made 43 saves, key ones in the third period and first overtime, but it was his giveaway that led to a goal that could have spelled the Devils' doom, not only for this game, but for this series.
"It's just unfortunate. It was just a tough bounce," Brodeur said. "It was a dump-in and (John Madden) kind of touched it and I went to play it. It went right over my stick. If I'd been able to clear it there, it could have been different."
The Devils had built a 2-0 lead in the first period behind goals by Brian Gionta, his seventh of the playoffs, and Serbei Brylin.
But after being held to only five shots in the first period, the Senators dominated play from the second period on. Daniel Alfredsson scored on a power play 4:23 into the period, but it looked like the besieged Brodeur would be able to hold Ottawa at bay until Emery was pulled in the final minute of regulation and Heatley scored the equalizer.
Overtime winner
Ottawa outshot the Devils 13-7 in a scoreless first overtime. Just three shifts into the second overtime, Ottawa's Chris Neil banked a puck off the boards that Devils rookie center Travis Zajac picked off and chipped up the boards. Sens defenseman Joe Corvo tried to keep it in the New Jersey zone, but the puck hit Langenbrunner in the skates and he took off.
Langenbrunner tucked the puck inside the right post, barely clearing Emery's left skate, and just like that, the Devils made this a series.
"Definitely we're back in it now," Brodeur said.
Red Wings even series
Pavel Datsyuk scored off a rebound with 1:24 left to give the Detroit Red Wings a 3-2 comeback victory over the San Jose Sharks, evening the Western Conference semifinal at a game apiece on Saturday.
Joe Thornton had a goal and an assist in the first 4:17, and San Jose held onto the two-goal lead until Henrik Zetterberg scored late in the second period.
The Sharks then made a rare mistake early in the third period with a Detroit-like giveaway. Daniel Cleary made them pay for it with a short-handed goal that made 2-all.
San Jose had two power plays midway through the final period, but took only one shot on the first opportunity and three on the second.
Detroit's Dominik Hasek made 17 saves, and Evgeni Nabokov stopped 19 shots.