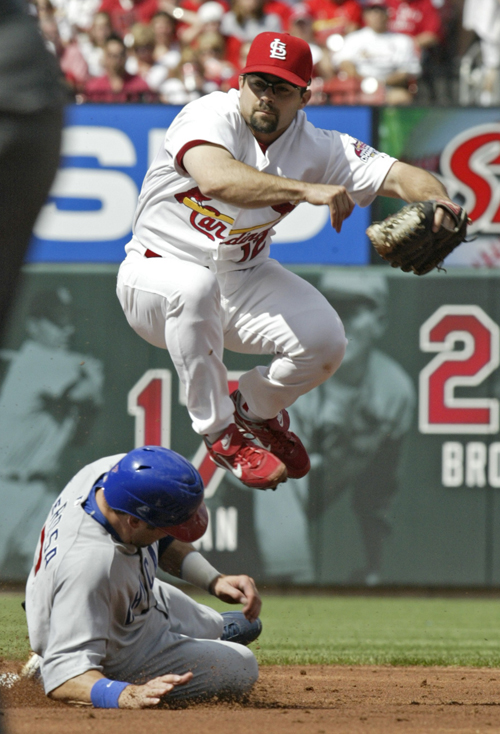 As we're seeing again this weekend, the St. Louis Cardinals are a team with problems, serious problems, and they are unlikely to clear up anytime soon.
The home team went quietly, offering virtually no resistance while being put away 8-1 by the Chicago Cubs on Saturday afternoon at Busch Stadium. Then the home team left, with a delegation of players and staff hurrying out of the clubhouse to get to the Fox Theater for the annual Bob Costas charity event featuring Sheryl Crow and Billy Crystal.
Perhaps Costas should have brought the show to Busch; Cardinals fans would have had something pleasant to cheer for, and gotten a few laughs, and enjoyed something to make them feel better. Instead, they had to ease into their seats and watch their team take a beating while Cubs fans cheered. The home-team effort was abysmal.
Not that anyone should feel sorry for the Cardinals or their fans. The sea of red celebrated the franchise's 10th World Series championship in October. Those memories will last, even if that special month of inspired baseball didn't. The Cardinals' 3-9 record at Busch this season is appropriately symbolic. Busch, the happiest stadium on earth last October, is now a restless, increasingly tense environment. The Cardinals have played 108 innings at home this season, and have had the lead after only 17 of those innings.
October's charm had no carryover effect, but no one is writing off the Cardinals (10-13). No one is saying they are doomed. They compete in the NL Central, after all. But it helps to be realistic, because this will be a grueling season, win or lose. The Cardinals are going to look futile at times. They'll scrape their way to some gritty wins. In other stretches, they'll actually appear to be a solid team, and lift spirits anew.
Let's not pretend that this opening month of the season is a false start. Actually, it's a continuation of a trend that delivers some inescapable truths. Since July 26 of last season, the Cardinals have a regular-season record of 35-48. If you want to include the postseason, fine. Even with October added in, the Cardinals still have a losing record (46-53) over the past 99 games.
That isn't a fluke. It isn't funny math. Since July 26, this team has a .256 batting average, a .326 on-base percentage, and a .417 slugging percentage. It's even worse (.233/.311/.349) vs. lefthanded pitchers. And though the cast has changed, the starting rotation is still scuffling; the starters' ERA since last July 26 is 4.85. After Adam Wainwright's third consecutive poor start, the starters' ERA for this month rocketed to 4.72, and Cardinal hitters are 13th in the NL in runs scored.
This team has holes. Management wasn't nearly aggressive enough in addressing an aging roster, the gaps in talent, and a remix of starting pitching. The Cardinals aren't bogged down by one problem; theirs is more of a system failure.
They were exposedo on Saturday by the Cubs' Carlose Zambrano. Zambrano (2-2) is unbeaten against the Cardinals in his last eight starts, going 5-0 with a 1.54 ERA (58 2-3 innings). He ended a three-game winless streak by allowing one run and seven hits with two strikeouts.
Everyone wanted to believe that October was for real. Everyone wanted to believe that all of the lurching and losing that preceded and followed October was the aberration. Not so. The Cardinals aren't very good. They'll have a chance to pick it up, especially if they can restore Chris Carpenter to a shaky rotation. But Cardinals' fans should themselves to deal with the harsh reality, and a hard summer.
In other NL action: Cincinnati 8, Pittsburgh 1; Houston 10, Milwaukee 1; Florida 11, Philadelphia 5; Atlanta 6, Colorado 2; NY Mets 6, Washington 2, 12 innings; San Diego 3, LA Dodgers 2; Arizona 5, San Francisco 4.
In AL action: Baltimore 7, Cleveland 4; Minnesota 11, Detroit 3; Texas 9, Toronto 8, 10 innings; NY Yankees 3, Boston 1; Oakland 12, Tampa Bay 5; LA Angels 3, Chi. White Sox 0. Kansas City 8, Seattle 3.