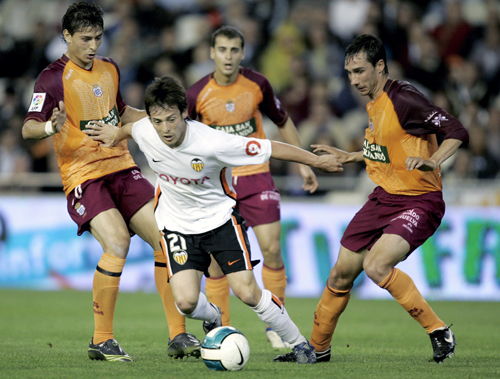 Two goals in three minutes from Joaquin Sanchez gave Valencia a vital 2-0 win over Recreativo Huelva and moved the 2002 and 2004 Spanish champion up to fourth place in La Liga on Saturday.
Joaquin got his first right on the hour from the right-hand edge of the six yard box after a defense-splitting cross by David Villa. The second from the right winger, one of the quickest men in the Spanish first division, was a wonderful chip from just inside the penalty box after a pass from David Silva.
Joaquin's form in recent games could herald a recall to the national side, for whom he has won 42 caps but not played since August 2006, ahead of Spain's Euro 2008 qualifiers against Latvia and Liechtenstein in June.
Spanish national coach Luis Aragones conceded this week that "the moment has come when he (Joaquin) could return but sometimes he needs a psychologist."
With the win Valencia, kept up the pressure on Spain's top trio, which are contesting the tightest three-way title race in five years.
Atletico Madrid and Real Betis battled each other to a standstill with a 0-0 draw earlier on Saturday, a result which did little to help either side.
Betis remain embroiled in the fight to avoid going down and although they are three places and five points above the relegation zone, all the rest of the Spanish first division strugglers have a game in hand.
By contrast, Atletico stayed in sixth place but are still hoping to return to Europe next season after an eight-year absence.
AC Milan warm-up
AC Milan warmed up for the second leg of the Champions League semifinals with a 1-0 win at Torino in Serie A on Saturday.
Also, Fiorentina beat Chievo Verona 1-0 on a 64th-minute goal by Reginaldo.
Clarence Seedorf scored with a long, rising shot in the 26th to move Milan ahead of Lazio into third place.
Torino was reduced to 10 men in the 73rd when defender Oscar Brevi was shown his second yellow card for a foul on Ronaldo.
Confident for Wednesday
On Wednesday, Milan hosts Manchester United in the Champions League. United won the opening leg 3-2 on Tuesday.
"Now we're confident for Wednesday's game," midfielder Andrea Pirlo said. "We've got the right condition in the right moment. Tomorrow, we'll start thinking about Manchester."