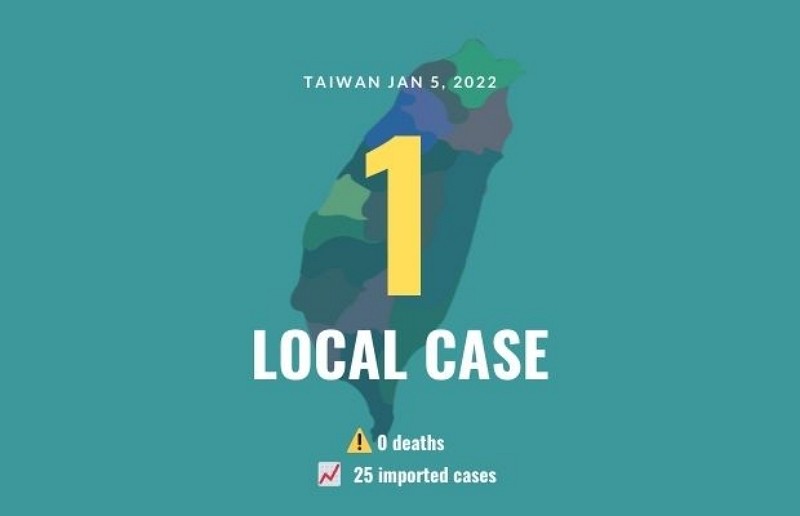 CECC head Chen Shih-chung (陳時中) announced 25 imported cases in addition to the one new confirmed local infection. The command center did not announce any deaths, leaving the COVID death toll at 850.

Chen said case No. 17,266 is a woman in her 50s who had been inoculated with two doses of the Moderna COVID vaccine and therefore is categorized as a breakthrough infection. The woman is a staff member of the same workplace and rode in the same vehicle as case Nos. 17,230, 17,238, and 17,239, all of which were breakthrough cases.

She was originally scheduled to be tested for the virus on Wednesday, but because she began to experience a dry cough and a sore throat on Monday (Jan. 3), she went to a testing station on Tuesday (Jan. 4). She tested positive for COVID on Wednesday morning with a Ct value of 16.

Like case No. 17,230, a quarantine driver identified as case No. 17,240, has been found to have been infected with the Omicron variant of the virus. Officials currently believe that the common link between the driver and the four cleaning workers is that they used the same airport restroom, but the exact cause of the cluster infection is still under investigation.

In addition, case No. 17,181, which was announced on Jan. 2, has been changed to a local case after an epidemiological investigation determined that their infection was tied to case No. 16,941. The two stayed at a Taipei epidemic prevention hotel where a Delta cluster infection occurred.