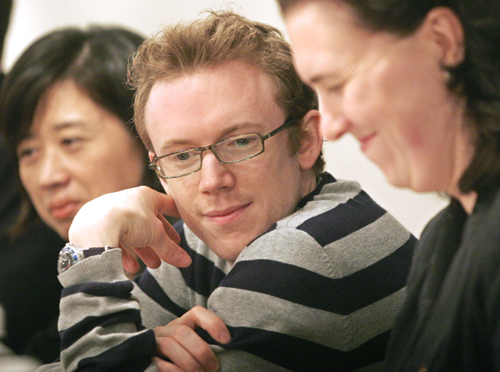 The touring London Symphony Orchestra arrived yesterday for its Taiwan debut this evening at the National Concert Hall in Taipei. A second concert to feature Beethoven's "Symphony No. 9 in D minor, 'Choral'" will serve as a highlight of the 20th anniversary celebrations of the Taiwan Semiconductor Manufacturing Company, Ltd.
The Oxford-born Daniel Harding, only 31, will be the featured principal guest conductor of the orchestra with a history of at least a century.
Both Taipei concerts at the National Concert Hall will be broadcast live on screens outside the concert venue to enable many more people to enjoy such world-class performances. Tickets to the events have been sold out since a month ago.
The program tonight will include: Dvorak's "Slavonic Dance No. 4, Op. 72," Mozart's "Piano Concerto No. 17, K453" and Berlioz's "Symphonie Fantastique, Op. 14." Lang Lang will be the featured pianist for the Mozart piece.
The repertoire tomorrow will include Mozart's "Violin Concerto No. 4 in D Major" and Beethoven's "Symphony No. 9 in D minor, 'Choral.'" Frank P. Zimmermann will be the violin soloist. Soprano Amanda Roocroft, alto Mihoko Fujimura, tenor Simon O'Neill and bass Peter Rose, all personally picked by conductor Harding, are the vocalists who will be highlighted in the program. The National Experimental Chorus will also be featured.
Asked yesterday if the LSO would play something from the "Star Wars" Trilogy: The Original Soundtrack Anthology composed by John Williams and recorded by the LSO as encore, Harding smiled and said that he would have to consult with the musicians in the orchestra. Apparently the board members, who make the decisions, are orchestra members.
"Just relax," said Harding, when asked what advice he would give young aspiring conductors confronted with the task of conducting big-name and big-time orchestras.
Harding, who will turn 32 on August 31 this year, learned to play the piano, the violin and the trumpet since childhood. He was not quite 20 when he got noticed by Sir Simon Rattle, even becoming his assistant at the Birmingham Symphony Orchestra. He made his professional debut with this orchestra.
While studying at Cambridge, he got to know Claudio Abbado, who invited him to be his assistant conductor at the Berlin Philharmonic Orchestra. At the age of 21, he got his break to wield the baton during a concert of the Berlin Philharmonic. At the age of 29, he made his debut with the Vienna Philharmonic.
"When you work with an orchestra for the first time," said the boyish-looking Harding, "you should not worry too much about whether you are going to get along or not. The pressure to please the orchestra is there. But if you meet a person and you are desperate to be his best friend, it is unlikely that you are going to be one. If it does not work with your orchestra the first time, it is not the end of the world."
The LSO flew in from Hong Kong. Harding said that their performance the evening before was dedicated to cellist and maestro Mstislav Rostropovich, who just passed away.
"The orchestra's relationship with Rostropovich dates back to 46 years," said Harding. "Many musicians in the orchestra had known him. My only encounter with him was when I sat backstage with him during the concert to celebrate the 100th anniversary of the LSO."
On this occasion, the LSO played a piece by a modern British composer. Rostropovich at that moment told Harding that the British composer once wrote a cello piece for him.
"How was it like?" asked Harding. "I have no idea," replied Rostropovich. Apparently many composers were eager to write music for him.
Harding first visited Taipei last year with the Mahler Chamber Orchestra. This was a group started by Abbado.
The negotiation to bring the London Symphony Orchestra to Taipei for the first time began a year and a half ago, said promoter Niu Hsiao-hua.
Mercedes-Benz Taiwan is the sponsor of the first concert. The second performance has been bought out by the Taiwan Semiconductor Manufacturing Company, Ltd.
The rehearsal of the London Symphony Orchestra this morning will be open to 500 music students from different music conservatories. A maximum of 30 students from each school will be accommodated.