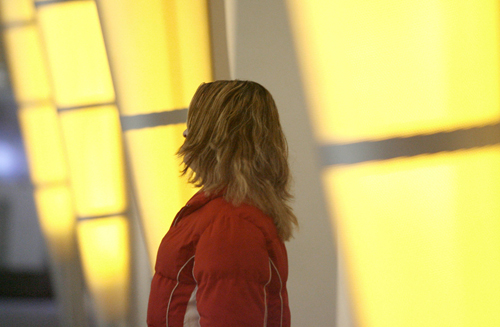 Fidan, her hair dyed blonde, is in hiding from her husband, who she says beats and rapes her. She is terrified her family will kill her if she goes home to eastern Turkey.
Back in Anatolia, the 19-year-old's relatives believe she has brought shame on them by leaving her 50-year-old Turkish husband, who is also in Germany.
She will not say exactly where he is.
"I won't go back. I am afraid. Death awaits me there," said Fidan, nervously biting her fingers and fiddling with her long hair. She has only basic German language skills and her lawyer interprets her broken sentences from Turkish.
Dressed in scruffy jeans and a red anorak, she looks like any other 19-year old Turkish girl living in Germany.
But Fidan is alone in Berlin, looking for a job and understanding little of what goes on around her. She says she has no friends and, with a cover name to prevent her husband finding her, she has even lost her identity.
Worst of all, she fears becoming an 'honor-killing' victim.
Condemned by many Islamic leaders, honor crimes are motivated by a desire to defend narrow traditionalist ideas of family reputation. They are a blight on Muslim communities in Europe - in Britain, Germany and Sweden - as well as in Islamic countries.
United Nations' bodies have said about 5,000 women die in honor killings globally every year. Many more commit suicide. But little is done to discourage the practice, which in Europe is hardly discussed.
"The family's honor depends on the woman and if it is damaged, the woman is destroyed," said Evrim Baba, who represents the far-left Linke party in Berlin's city parliament. She is a Kurd who came to Germany when she was 11.
"Many girls in immigrant communities are trapped in rigid patriarchal structures and live in fear of their families."
In Germany, which has the second largest Muslim population in western Europe after France, 55 attempted honor killings took place between 1996 and 2005, say police.
A case last year propelled the issue into the headlines.
A man of Turkish descent was jailed for shooting dead his sister at a Berlin bus stop after she left her husband to live alone. His brothers were acquitted of conspiracy to murder.
Tragic tale
Cases like this eat at Fidan, who grew up in rural a village in Turkey's region of Anatolia where cultural traditions still play a big role.
"I didn't have a childhood. All I remember is beating and subjugation," she said. "I have no happy memories."
At 14, she was betrothed to a cousin. When she said she did not want to marry him, Fidan was beaten. Only after she took handfuls of pills, hoping to die, was the marriage called off.
Rumors started circulating that the engagement was canceled because she had lost her virginity, a charge that Fidan denied but which also had the potential to damage her family's honor.
Relatives threatened her, saying "bad girls" tended to drown or fall off a mountainside, but eventually they found a man in Germany who would marry her.
To prove she was a virgin, Fidan says, she was raped on her wedding night. The blood-stained sheets were ripped from the bed to be inspected by relatives waiting at the door.
Fidan, unwilling to talk about these painful memories, rubs her forehead and lowers her gaze as her lawyer tells the story.
After about four months of continual beatings and rape she fled, encouraged by her German teacher.
Her husband says if he finds her he will report Fidan to the authorities to be sent back to Turkey.
"The message from Turkey is: something had better happen to you en route, or you will die here," said Fidan's lawyer Canan Bayram.
All Fidan wants now is to build a life in Germany.
"God willing, I can be happy here. I want to find a job and a flat, but no husband, no children," said Fidan with a smile.
Legal headaches
But it isn't easy.
Fidan, who wants to take her husband to court for beating and raping her, has to wait another year before she can act without risk of deportation.
In Germany, immigrant women have to be married for two years before they can divorce and stay in the country independently.
A ruling in Frankfurt last month highlighted the conflicting attitudes which enable honor crimes to continue, say Muslim women. A judge refused a quick divorce to a battered wife of Moroccan descent saying it was not unusual for a man with a Moroccan background to physically punish his wife.
"Women need greater legal protection," said Bayram.
"The EU and Germany are helping women in forced prostitution and people-trafficking, but little is being done about protecting women from honor crimes."
Many women say the failure of Germany, home to about 3.2 million Muslims, to face up to honor crimes is a result of the lack of an integration policy in the past followed by half-hearted attempts to engage with Muslim communities.
Most of Germany's 2.5 million people of Turkish origin are "guest workers" and their descendants, whose labor helped fuel the post-war economic miracle.
"There was no integration policy for decades and parallel societies developed," said lawmaker Baba. "Many immigrants reverted to traditional systems."
As fears grew about the radicalization of disillusioned young Muslims, politicians decided a couple of years ago they had to improve integration and engaged with Islamic groups.
But issues like honor killings are barely mentioned.
"It is preposterous that by not discussing such murders, the government is damaging the future of thousands of girls," said Arzu Toker, of the Central Council of Ex-Muslims.