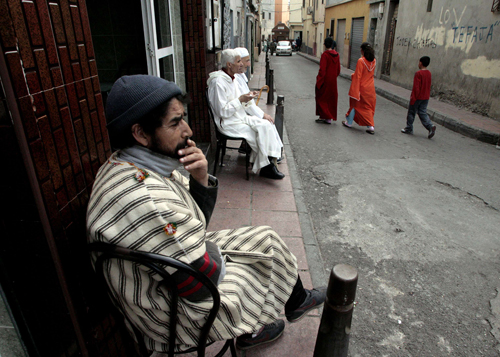 Spain's North African enclave of Ceuta officially prides itself on its harmonious mix of cultures, but fears of terrorism are souring relations between Christians and Muslims.
In Ceuta's Principe neighborhood, a cubist jumble of Moroccan-style houses overlooking the razor wire fences of Spain's land border with Morocco, people are sick of what they describe as constant media depictions of Muslims as terrorists.
"The Cold War is over, the Soviet Union isn't a threat, nor China, and people have to have an enemy. The enemy is Muslims and Arabs," Mohamed Abselam, a local butcher, told Reuters.
"If I go to the United States, I'm a terrorist, if I go to Europe, England for example, I'm a terrorist. If I grow a beard, in keeping with tradition, I'm a terrorist," he said.
The Spanish government stepped up security in the town, which is on the African coast a short boat ride across the Straits of Gibraltar, after a series of suicide bombs in Morocco, claimed by al-Qaida, earlier in April.
In December, al-Qaida's number two, Ayman al-Zawahri, also singled out Ceuta, together with Spain's other North African possession, Melilla, as Muslim territories "occupied" by Christian invaders. Both have been under Portuguese or Spanish rule for centuries.
Extra Guardia Civil police, assisted by explosive-sniffer dogs, now patrol border posts crossed every day by thousands of vehicles and tens of thousands of Moroccan traders bent double by sacks of goods bought in Ceuta to be sold at home.
The town government says additional vigilance is needed but worries attendant bad publicity could affect tourism.
"The people of Ceuta are going about their normal business as calmly as ever, just as calmly as any other Spaniard or European. It's not just Ceuta which has been threatened by that organization," said government spokeswoman Yolanda Bel, referring to al-Qaida.
She said community relations were excellent in Ceuta, where about 40 percent of the population are Arabic-speaking Muslims and which is also home to established Hindu and Jewish minorities.
Moroccan claim
Unlike mainland Spain, whose birth as a nation in the Middle Ages dates from the expulsion of Muslim Arabs who ruled much of its territory for eight centuries, Ceuta has always had a Muslim population.
"We're all integrated here. We're all living together in total harmony," Bel said in an interview.
Many Muslims disagree. They said that in private Christians still use the offensive term "moro," or "Moor" and that a long-standing claim by Morocco on Ceuta meant they had long been regarded with suspicion.
Abdel Krim was one of those who spoke of better times past, holding out a photograph of a neighborhood soccer team reunion to make his point.
In the picture, a group of graying men, Christian and Muslim, posed together at a party to mark the first time they had seen each other for 30 years. As boys, they had scrabbled about in the streets of Ceuta together.
Things aren't like that any more, said Krim, speaking outside one of the town's many mosques as men filed out after Friday prayers.
"This used to be a mixed neighborhood, but a lot of the Christians have moved away," said the former metal worker.
Things took a turn for the worse after the September 11 attacks in the United States, and then when a group associated with al-Qaida attacked Spain in March 2004, killing 191 people who were going to work on trains in Madrid.
In December, a military-style police operation arrested 11 suspected Islamist militants in Principe, although several were later released.
People there are still indignant.
Mohamed Ali, leader of Ceuta's small main opposition party, said Muslims often felt their loyalty was in question.
"Ceuta's Muslims have given ample proof that they are Spaniards," he said.
He dismissed as ludicrous a claim by one of Spain's most respected think-tanks, the El Cano Institute, that 15 percent of Spanish Muslims, including recent immigrants to the mainland, sympathized with al-Qaida.
Ceuta's Muslims top Spain's lists for unemployment and school drop outs, Ali said, adding that Principe lacked proper rubbish collection and that its electricity often failed.
Like other Muslims here, Ali called for Arabic to be made an official language in Ceuta, saying it would help Muslim children do better at school.
But an official working for the town's strongly pro-Catholic Popular Party government bristled at the suggestion.
"This is Spain," he said.