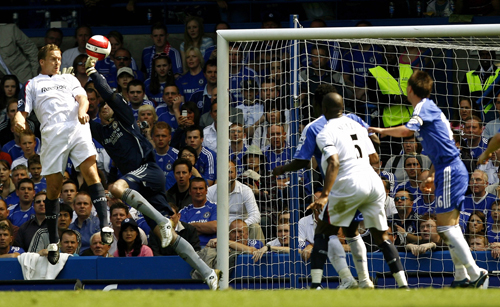 Sir Alex Ferguson promised yesterday he would treat Sam Allardyce to a hug and a kiss after Bolton held Chelsea to a draw that leaves Manchester United on the brink of reclaiming the Premiership title.
After watching United come from two goals down to beat Everton 4-2 and pull five points clear at the top of the table, Ferguson acknowledged that Allardyce's men had done him a huge favor by holding the defending champion to a 2-2 draw at Stamford Bridge.
"Sam will be getting a hug and a kiss," the Scot said with a smile. "Maybe two kisses!"
The results mean that United, thanks to its superior goal difference, needs to take four points from its remaining three games to be sure of winning the title, and it could have wrapped it up before traveling to Chelsea for the penultimate match of the season on May 9.
Championship in sight
If Ferguson's side beats local rival Manchester City next Saturday and Chelsea fails to beat Arsenal at the Emirates Stadium the following day, United will be champion for the first time since 2003.
"Obviously the momentum is with us now," Ferguson said. "Five points clear and with a superior goal difference gives us a marvelous chance with three games left."
The United boss cautioned, however, that the lunchtime trip to City would come in the wake of a grueling trip to Italy for Wednesday's Champions League semifinal second leg against AC Milan.
"We know what that can do to the players. It will be very difficult and we can't count any chickens yet. But there is marvelous spirit in the camp and I think that is going to play for us."
Initially lackluster, United had looked doomed to defeat at Goodison Park when Portuguese midfielder Manuel Fernandes hammered an stoppable 25-yarder past Edwin van der Sar, five minutes after halftime, to double the lead established by Alan Stubbs's first-half free kick.
But a howler by Everton's stand-in goalkeeper, Iain Turner, allowed United back into the contest.
The Scot, only playing because Tim Howard was prevented from doing so under the terms of his season-long loan from United, dropped a cross to leave John O'Shea with a simple finish.
"That was a break for us," admitted Ferguson, who reacted to the goal by gambling on the introduction of Cristiano Ronaldo, despite his star winger carrying a minor injury.
The Portuguese winger had an immediate impact, rising to meet a corner with a powerful downward header that former United player Phil Neville sliced into his own net.
That set the stage for Wayne Rooney to effectively settle the contest with 11 minutes left and, with news of the Chelsea result filtering through, substitute Chris Eagles curled in United's fourth.
Chelsea loses lead
At Stamford Bridge, Bolton grabbed the lead after the Chelsea back four made a hash of dealing with a 19th-minute corner, the ball falling to Lubomir Michalik, who lashed it home from close range.
The champion was level inside three minutes, Salomon Kalou heading in a Wayne Bridge cross, and went ahead when Kalou's header ricocheted off the bar, a Bolton defender and finally goalkeeper Jussi Jaaskelainen before ending up in the back of the net.
Bolton refused to give up the fight, however and, nine minutes after the interval, Kevin Davies grabbed an equalizer with a close-range header and Sam Allardyce's side held out for a draw under the inevitable late barrage from Jose Mourinho's men.