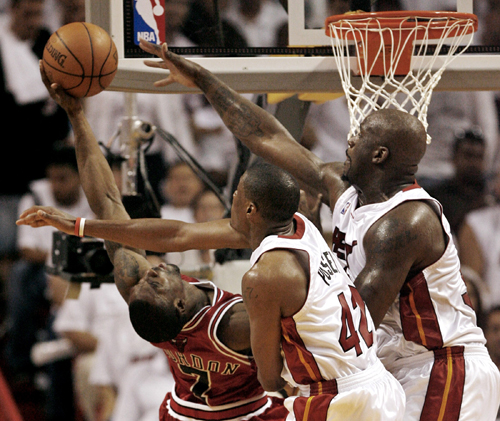 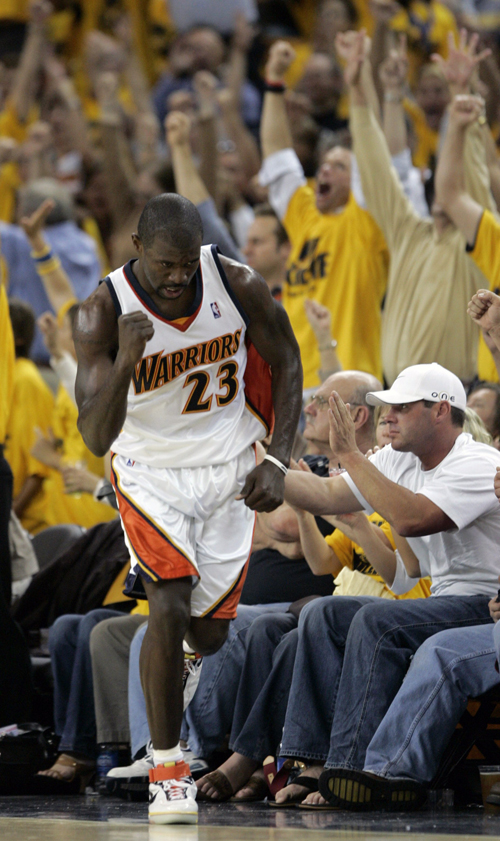 Forget that notion that these Bulls can't win pressure-packed playoff games on the road.
These emboldened Bulls - older, wiser and buoyed by two home wins to start this playoff series - are different than the group that lost three playoff games in Miami last year, and stumbled to an 18-23 road record this season.
And that was thoroughly evident when Chicago, down 12 points with 4:25 left in the third quarter, unleashed a 35-14 stampede over the next 12-plus minutes to surge ahead by nine and emerge with a 3-0 lead in this playoff series.
"Maybe two years ago, they would have been up 20," guard Chris Duhon said of Chicago's deficit.
"It would have been a blowout. We're a different team. We've grown up."
So many Bulls contributed to this rousing comeback. Ben Gordon scored 22 points in the second half after enduring foul trouble and scoring just five points on 1 for 6 shooting in the first half. Luol Deng had 11 points and eight rebounds after intermission.
Ben Wallace had two steals, one blocked shot and a few deflected passes in an energy-filled eight fourth quarter minutes. Kirk Hinrich scored 11 of his 22 points in the fourth quarter, including three for three from the field and did good defensive work against Dwyane Wade. Andres Nocioni hit a three-pointer that started the rally from 12 down, then essentially settled matters by drawing a charge on Antoine Walker with the Bulls ahead 101-96, and 38.4 seconds left.
Gordon, who scored 24 and 27 in the first two games of the series, left with his second foul just 2:19 into the game and had more turnovers in the first half (three) than baskets. But he came alive with 10 third quarter points, then added 12 more in the fourth. He also made 8 of 10 free throws in the fourth quarter; by comparison, the Heat went 4 for 11 from the line in the fourth.
"I tried to play aggressively and take my shots in rhythm," he said. Bulls coach Scott Skiles noted Gordon has struggled at times in the past on nights he was bothered by foul trouble. "He hit some big shots and handled the ball well," Skiles said.
Deng, who scored 33 and 26 points in the first two games, was held under control by James Posey during the second quarter after an 11-point first quarter. But in the second half, he regained the edge that has made him arguably the most valuable player to this point in this series.
"To come here and beat the champs on the road says a lot about how we are maturing as a team," Deng said. "Our small lineup is great for us."
And don't forget Wallace, who blocked a Shaquille O'Neal hook shot with the Bulls down one three minutes into the fourth quarter. The Bulls took the lead shortly after that, on a Hinrich runner, and never trailed again.
"He was fantastic again," Skiles said of Wallace. "It is tough duty down there. He is giving up a lot of inches and pounds and he was fantastic."
Warriors wow crowd
The Oakland Warriors dismantled the Dallas Mavericks 109-91 here Friday to take the lead over the Western Conference top seeds in the National Basketball Association playoffs.
Playing in front of a raucous crowd in their first home playoff game in 13 years, Jason Richardson scored 30 points and Baron Davis added 24 for the Warriors, who took a two-games-to-one lead in the best-of-seven first-round series.
Andris Biedrins collected 10 points and 10 rebounds for the Warriors, whose frenetic pace left Dallas scrambling.
After starting the season with four straight losses, Dallas went on to win a franchise-record 67 games en route to the league's best record - tied for sixth-best in NBA history - and home-court advantage throughout the playoffs.
The Mavericks also reeled off three impressive winning streaks of 12 games or more in the regular season, including a 17-game run from January 27-March 11.
But Golden State - which defeated Dallas three times in the regular season - has reversed roles in this best-of-seven series. Executing coach Don Nelson's run-and-gun offense to perfection, the eighth-seeded Warriors have the Mavericks on their heels.
"We have to make sure we don't let our guard down and continue to play," said Nelson. "We know who we're playing. We know how good they are. That's why we feel so lucky to win our second game."
Richardson led the charge, continually driving to the basket to take advantage of his startling athleticism en route to a 12-of-19 shooting performance.
Davis shot 9-of-18 from the field, seemingly entering the paint at will - once glaring at Mavericks superstar Dirk Nowitzki after a particularly impressive finish in the third quarter.
It seemed as though Davis was feeding off the franchise-record crowd at Oracle Arena. With each drive to the basket or smooth jump shot, the playoff-starved - but basketball savvy - Oakland crowd exploded.
Clad in yellow tee-shirts reading "We Believe," Warriors fans watched their team run out to a nine-point lead after the opening period and never looked back.