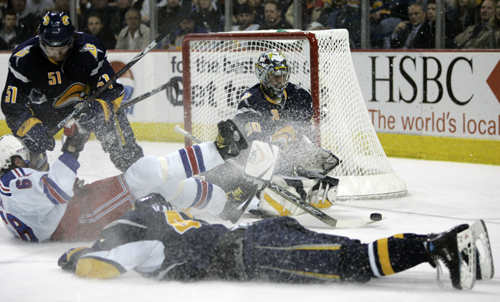 The New York Rangers' weapon of choice for their Game 1 self-destruction was the unnecessary penalty.
Friday night, with that problem solved and a shut-down game plan working beautifully, the Rangers came up with a new way to destroy themselves: two devastating brain cramps within 20 feet of their own net.
Marek Malik committed the first to cough up the lead. And the Paul Mara-Karel Rachunek defense pair and center Blair Betts shared responsibility for the second one - the own-zone breakdown that allowed the lethal Thomas Vanek to break a tie with 9:49 left in the third period.
Heaped upon one another, those Rangers gaffes handed the Buffalo Sabres a 3-2 victory Friday night at HSBC Arena and a sweep of the two games here that opened the teams' Eastern Conference semifinal series.
The best-of-seven moves to Madison Square Garden for the next two games, but to get it back to Buffalo, the Rangers will have to reprise the clamp-down work in the neutral zone that held the Sabres to just 18 shots on goal while eliminating the calamitous mistakes that handed the NHL's top team in the regular season a couple of victories.
"I definitely think we played almost a perfect game," said goaltender Henrik Lundqvist, who slashed a dent into the threshold of the Rangers' dressing room door coming off the ice. "Take away the two mistakes that cost us two goals and we're going to win this. The key for us now is to forget about this, go back to New York and get ready for Sunday, where we're going to have a great crowd behind us. We're definitely not going to give up."
Perhaps, by the next game on Sunday, Rangers captain Jaromir Jagr will have stopped shaking his head in disgust and muttering, "Unbelievable," as he still was 30 minutes after Friday night's final buzzer.
Playing the passive checking system that Jagr normally abhors but which he considers the only way to beat the Sabres, the Rangers held Buffalo to nine shots on goal through two periods. And off power-play goals by Martin Straka and Mara, the Rangers took a 2-1 lead into those final 20 minutes.
Lead quickly dissolves
That lead didn't survive the first shift of the third period.
Under no pressure, Malik backhanded a pass up the middle that was nowhere near its intended receiver, Michael Nylander. Toni Lydman intercepted and slapped a shot that was heading just wide of the right post until the all-alone Chris Drury redirected it home.
Midway through the period, the Rangers' fourth line was forced to extend a shift when its own attack deep in the Buffalo end turned into a counter the other way. Both Mara and Rachunek chased into the defensive right corner when Buffalo defenseman Brian Campbell worked all the way behind the net. When Campbell fed out front, Drew Stafford won the puck from Betts and slid a nifty back pass to a cutting Vanek, who beat Mara out of the corner to chip home the goal that gave the Sabres their first lead of the night.
Miller (31 saves) would preserve that lead with a sprawling save on Jagr with 2:00 left and by holding off a Rangers power play over the final 1:54 that the Rangers made a 6-on-4 by putting Lundqvist on the bench for the length of the penalty.
"It's definitely frustrating," Betts said. "We outplayed them pretty much the whole game and they get one opportunity and they put it in the net. If that's what's going to happen, we can't give them those opportunities. But it's pretty frustrating."