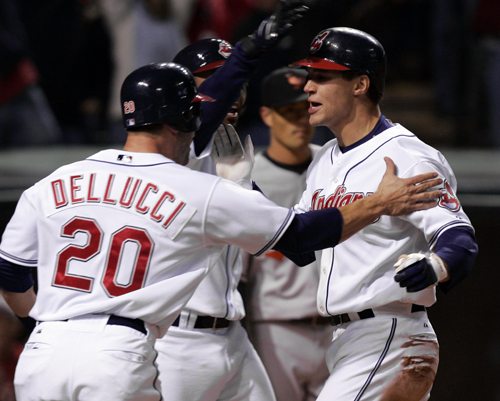 Here's why only dopes bet on baseball games:
The Cleveland Indians' Fausto Carmona faced the Minnesota Twins' Johan Santana Tuesday night in the Metrodome.
Carmona hadn't won a game since beating Detroit in his big-league debut April 15, 2006, going 0-11 in the interim, a period in which he served as the Indians' closer long enough for Amnesty International to demand an end to this cruel and unusual punishment.
Santana had won 21 games and his second Cy Young Award during the same time span. The Indians never had beaten Santana in 11 starts on his home field.
So, of course, Carmona outpitched the guy widely acclaimed as the best in the business. He held Minnesota to two runs and six hits in 7 2/3 innings in a 5-3 victory.
"I wasn't thinking about facing (Santana)," Carmona said. "I was concentrating on keeping the ball down and getting as many ground balls as possible."
Winning such a reverse lock is the kind of thing that happens when it is your year. It's far too early to make that declaration about the Indians, but we can say April was their month (13-7 entering the weekend), which is no small thing in Cleveland. In the four previous seasons under manager Eric Wedge, the Indians had gone 38-59 in April.
Since Grady Sizemore dropped that routine flyball in Kansas City, beginning the 1-6 finish that cost them a spot in the 2005 playoffs, they entered this season having won only 79 of their last 169 games. Yet general manager Mark Shapiro stuck with Wedge.
Wedge appears to be doing a great job putting the parts of his team together this time around. The Indians entered the weekend leading the American League Central and owning the third best record in the majors despite glaring weaknesses.
The lineup built around Travis Hafner, Victor Martinez and Sizemore had delivered a .232 batting average with runners in scoring position, better than only two AL teams (White Sox .225, Oakland .222). The off-season and spring emphasis on improved fielding had not prevented 18 errors, the second most in the league (Yankees 19). The rebuilt bullpen had held up well even though closer Joe Borowski had been scored on in five of 11 outings, compiling a 9.90 ERA.
The Indians entered the weekend having struck out 53 times in their last five games, all of which they had won.
"We struck out a lot last year too," Wedge said. "That's not something we get caught up in, as long as we score runs."
The two keys behind Cleveland's quick dash out of the gate were C.C. Sabathia (3-0, 3.18 ERA in five starts, all Indians victories) and Hafner.
If not for a C.J. Wilson pitch that broke a bone in his right hand September 1, the guy known as Pronk would have been a serious MVP candidate last year. He appears quietly to have passed guys like David Ortiz, Manny Ramirez, Vladimir Guerrero and Barry Bonds to become the most consistent slugger in the game.
Through 19 games this year, Hafner was hitting .357 with five homers, 16 RBIs and 17 walks, six of which had been intentional. He was 17-for-30 with four homers during Cleveland's 4-4 trip to New York, Tampa Bay and Minnesota.
"He belongs in a higher league," Devil Rays manager Joe Maddon said when the Indians were in Florida.
Cleveland's fast start could indicate the AL Central will be a four-team race, as many forecast. The Indians, Tigers, Twins and White Sox were a combined 47-33 entering the weekend.
April tells us things. This year it is suggesting strongly that the Central again will put two teams into the playoffs, a trend that easily could mean this becomes an ugly season for the Yankees, who have serious pitching problems to go along with a mercurial star (Alex Rodriguez) and a manager (Joe Torre) who could be at the end of the line in the Bronx.
In Friday's AL action: Boston 11, NY Yankees 4; Minnesota 5, Detroit 3; Cleveland 5, Baltimore 4; Texas 5, Toronto 3; Chi. White Sox 7, LA Angels 3; Seattle 7, Kansas City 4; Tampa Bay 4, Oakland 1.
In NL action: Pittsburgh 3, Cincinnati 1; Washington 4, NY Mets 3; Philadelphia 6, Florida 5; Milwaukee 4, Houston 1; Chicago Cubs 5, St. Louis 3; Atlanta 9, Colorado 7; Arizona 3, San Francisco 2; LA Dodgers 6, San Diego 5.