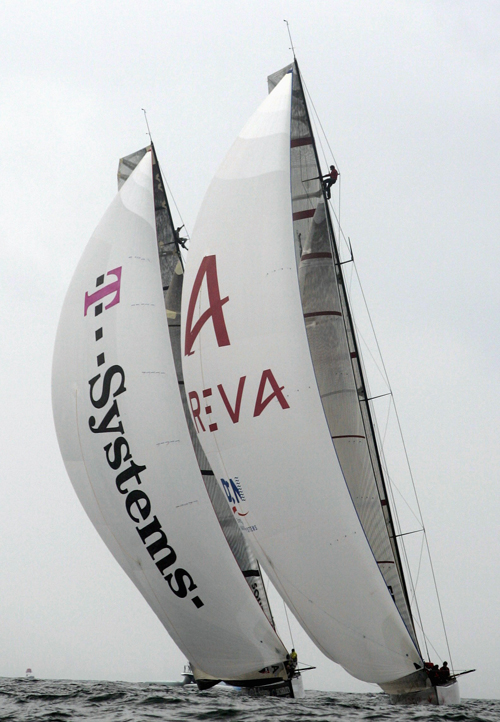 South Africa's Team Shosholoza and France's Areva Challenge were the main winners and losers at the Louis Vuitton Cup in Valencia on Friday.
The pair met in round 11 of the first stage of the round robin matches with Areva holding a 100-meter cushion at the finish only for the hapless French to get disqualified on a technicality.
"All their boat hadn't crossed the (virtual finish) line, the top of their mast didn't pass on the right side of the line," a spokesman for the race committee explained.
Areva, which had earlier had seen off United Internet Team Germany, remained in eighth in the standings after this sixth defeat, one place behind Team Shosholoza.
But the French later announced they were appealing the decision.
Sebastien Col, Areva's helmsman, said: "We haven't fully understood why we didn't win. We are aware of the rule but want to study the television images and photographs.
"At this moment we feel that the decision is unfair, when we saw that it wasn't our flag raised we were devastated."
Mark Sadler, Team Shosholoza's skipper, said: "We were neck and neck crossing the line and it was impossible for us to see whether they completed it or not. Our objective was to just cross the line before they had completed.
"It was completely up to the judges and their decision. We were just holding our breath - it was not in our control, we just sailed as fast as we could to see if they were going to complete.
"It either goes your way or it doesn't. We only realized we had won when the blue flag went up."
The five favorites to emerge from the round robin stage and into the semi-finals of this America's Cup qualifying competition - BMW Oracle, Emirates Team New Zealand, Luna Rossa and Desafio Espanol - all had an unscheduled day off as the lack of wind forced a total of six races to be held over late yesterday.
The Louis Vuitton standings are headed by America's Oracle, unbeaten after 10 races, with the Kiwis three points adrift with Luna Rossa and Desafio Espanol sharing third one point further back.