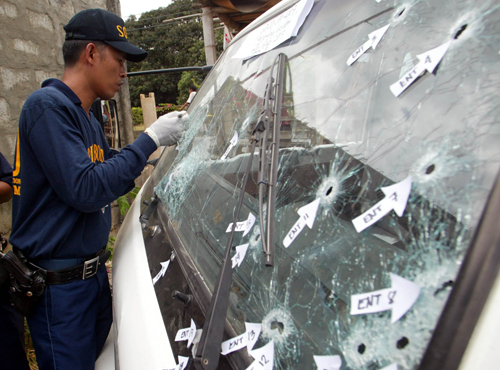 The Philippines' election watchdog yesterday placed a northern province under its security control after two people were killed in the worst outbreak of violence in the run-up to the May mid-term vote.
Commission on Elections (Comelec) head Benjamin Abalos travelled to the northern province of Nueva Ecija to check on police operations and help prevent rival political supporters from attacking each other.
Armed men fired on a convoy carrying allies and sons of former mayor of Jaen Antonio Esquivel near the town late Thursday.
A town council candidate and a police escort were killed while 17 others were wounded, including three police escorts and Esquivel's two sons, Mark Lawrence and Mark Anthony - who underwent surgery for bullet wounds to the head.
Police initially reported only 10 were injured, but later revised the figure to 17 after further checks with local officials.
Abalos said he had to place Nueva Ecija under his control to prevent an escalation of violence.
"We are only doing this because it is necessary," Abalos said. He clarified that the provincial government would remain in control of day-to-day operations other than security, which would be taken over by Comelec police deputies.
Nueva Ecija Governor Tomas Joson said he had spoken with Abalos and confirmed he had agreed to the set-up. "Comelec will not intervene in my authority over the civilian government," he said.
Intimidating voters
Elections in the Philippines are often marred by violence as rival groups use force and private goons to intimidate voters and political opponents.
There were 148 deaths recorded during the presidential elections in 2004 and 111 deaths linked to the mid-term elections in 2001.
National police chief Oscar Calderon said an internal police investigation was being conducted because policemen had been involved in the current violence.
"Traditionally, the home stretch (of the vote) is the critical point when passions flare, old rivalries heat up and last-minute issues develop," he said.
He said police had already disarmed 52 out of 90 "private armies" controlled by politicians nationwide and had arrested more than 2,000 individuals illegally carrying guns.