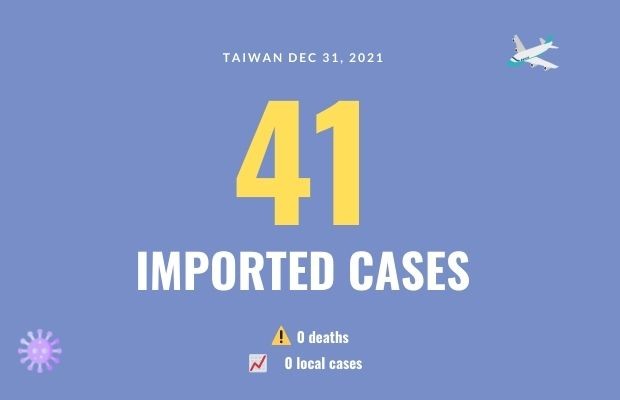 Friday’s imported cases were 16 men and 25 women aged between 20 and 79. A total of 14 had arrived from the United States, two each from the Philippines and France, and one each from Vietnam, Cambodia, India, Ukraine, Italy, Switzerland, the United Arab Emirates, Cameroon, and Kenya.

The place of origin for an additional 14 new imported cases was still being investigated, according to the CECC. They entered the country between Dec. 16-30.

Taiwan’s latest total number of 17,029 coronavirus cases includes 14,600 domestic cases and 2,375 imported ones. Of the 850 fatalities, 838 were the result of local infections, with New Taipei City registering 413 deaths and Taipei City 322.

A total of 36 COVID cases originated from a journey by the Taiwan Navy’s "Goodwill Fleet" in 2020, two were infected onboard a flight, one case was classified as unresolved, and 14 cases were put under investigation. A total of 111 earlier patients were removed from the list of confirmed cases.