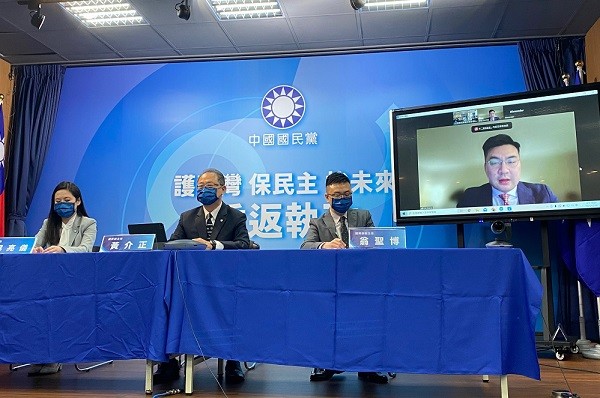 TAIPEI (Taiwan News) — The Kuomintang (KMT) is in the midst of an international pivot as it prepares to reestablish an official presence in Washington to spread a counter-narrative to that of President Tsai Ing-wen's (蔡英文) Democratic Progressive Party (DPP).

Speaking via video link Tuesday, International Affairs Department Deputy Director Eric Huang (黃裕鈞), who is overseeing the launch of the liaison office, said it is proceeding according to plan and set to open early next year. The party's last U.S. office shuttered at the start of the Ma Ying-jeou (馬英九) administration in 2008.

In a sign of how much weight the KMT is placing on its public relations operations stateside, party elders such as Director Huang and veteran diplomat Andrew Hsia (夏立言) will travel to the U.S. to leverage their deep connections in the country.

"I will go with more than 30 years of my credibility and integrity," Huang told Taiwan News. "We want to present stable, trustworthy counterparts to our American friends."

Huang, who also teaches strategy and wargaming at Tamkang University, noted the past year has been fraught with challenges such as the ongoing pandemic, rising incidence of extreme weather events, and U.S.-China struggle for global influence.

"We want to discuss a common future because the U.S. needs time to materialize, or to realize, the full concept of Indo-Pacific strategy," Huang told Taiwan News after the event. While he acknowledged calls among U.S. Taiwan-watchers for the country to boost its defense budget in the face of the Chinese threat, he said Taiwan shares responsibility for lowering the temperature in the strait, "not only by adding money to defense spending but also using our unique position and smart strategy ... with the full understanding of Washington, so we can have even larger overlapping interests and trust."

As Taiwan's time in the international spotlight has increased recently, so too has the risk of military confrontation in the Taiwan Strait, he remarked, pointing out that over the past five years, the country has lost eight diplomatic allies on the DPP's watch.

The security environment around Taiwan will be shaped in the near term by several events, including next year's American midterms, Taiwan local elections, and the Chinese Communist Party's 20th National Congress. Meanwhile, with the pandemic and vaccine supplies continuing to affect travel worldwide, emerging technologies could open up new frontiers in diplomacy.

The press event came less than two weeks after the KMT suffered a major domestic setback, losing all four of the proposals it had put forward in a national referendum. One of the issues on the ballot was a ban on U.S. pork containing traces of the leanness-drug ractopamine, which the Tsai administration had allowed in last year as part of its bid for a trade deal with Washington.