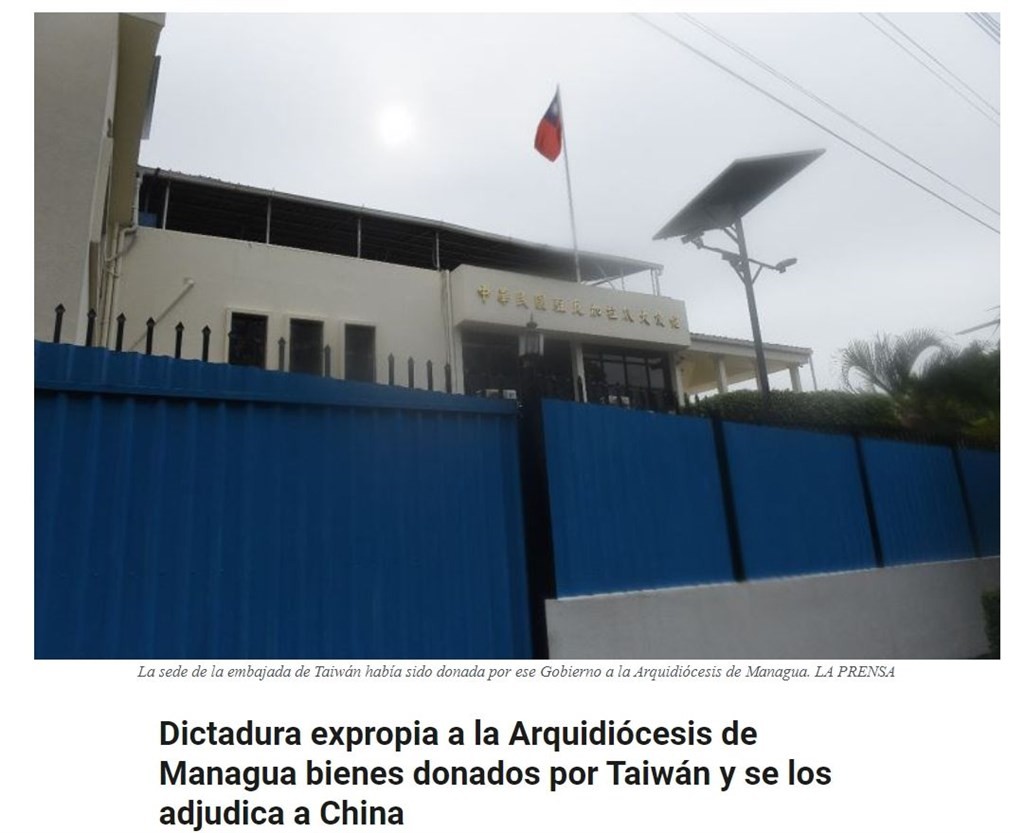 On Dec. 9, Nicaragua announced it was severing diplomatic ties with Taiwan in favor of China.

The Central American country's government demanded that Taiwan evacuate all personnel by Dec. 23. According to a report released by La Prensa on Sunday (Dec. 26), Taiwan's government hastily donated the former embassy to the Roman Catholic Archdiocese of Managua.

In a second article posted Sunday, La Prensa reported that the Ortega regime had ordered the building and all associated assets to be seized and transferred to the Chinese government, citing Nicaragua's adherence to the Chinese Communist Party line that Taiwan is part of China. The edict warned that anyone who makes "illegal claims" to the property and assets will face "corresponding tribunal and judicial actions."

In response to the incident, Taiwanese Ministry of Foreign Affairs (MOFA) Spokesperson Joanne Ou (歐江安) stated at a press briefing Monday (Dec. 27) that Taiwan is a "sovereign and independent country" unaffiliated with China. Ou said that based on Article 45 of the Vienna Convention on Diplomatic Relations, the Nicaraguan government is obligated to protect Taiwan's embassy property and archives after the severance of diplomatic ties.

Ou said Taiwan cannot accept the "illegal encroachment" by the Nicaraguan government and transfer of its property to China. She pointed out that the two-week deadline for withdrawal that had been set for the embassy was inconsistent with international norms and disregarded international law.

The spokesperson said the "arbitrary obstruction of Taiwan's symbolic sale" of embassy property for use by the Catholic Church represents an encroachment on embassy assets and other major violations. She stressed that the Taiwanese government strongly condemns this act.

Ou confirmed that in order to fulfill its responsibility to deal with state-owned property overseas, Taiwan had sold the embassy premises to the Archdiocese of Managua for public welfare within an extremely limited timeframe. The sign-over was completed on Dec. 22 and notarized by a local attorney, she added.

According to Ou, the church had "promised to properly protect and use the former Taiwanese embassy's property." She reiterated that Taiwan has never been part of China and that the Chinese Communist Party regime has "no right to interfere in Taiwan's foreign affairs, let alone inherit Taiwan's property."

Ou said MOFA calls on the international community to condemn the Nicaraguan and Chinese governments' "abominable actions." She asked people from all walks of life to assist the Nicaraguan Catholic Church in fighting for its due rights and demanded that the Nicaraguan government return the property to the archdiocese.