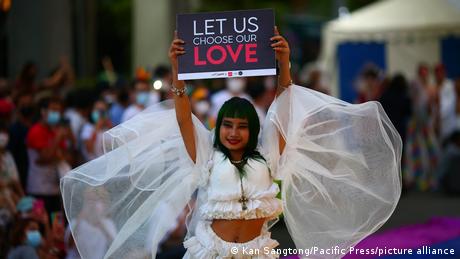 Despite its international LGBTQ-friendly image, rights activists in Thailand warn that the country is still far from granting equal rights to members of the LGBTQ community.

Nattawut Kongsawat, an LGBTQ activist and employee at a multinational firm, told DW that the fact that same-sex marriage is still banned in Thailand is evidence that members of marginalized communities are not viewed as equals in the eyes of the law in the southeast Asian country.

"I want to get married legally. My partner is not entitled to the benefits provided by my company as I cannot list him as my legal spouse in Thailand, although we have been living together for the past six years," Nattawut said.

In a newly issued 12-page statement this month, Thailand's Constitutional Court declared that "marriage equality would not only overturn the natural order, but it would also shake the very foundation of society and humanity."

Last month, the court ruled that Section 1448 of the Civil and Commercial Code — which only recognizes marriages between a man and a woman — does not violate the country's constitution.

The high court also argued that if LGBTQ people were allowed to marry and adopt children, they would be unable to form the same kinds of family bonds that heterosexual couples have with their kids.

The ruling was met with rage and disappointment by members of LGBTQ communities, who said the court's decision demonstrated that prejudice and discrimination influenced the decisions of the judges.

"I was frustrated, disappointed and disheartened at the decision. Their rationale is archaic and discriminatory — not only against us but also women and men who do not want kids," Nattawut said. "If we believe everyone is equal, why wouldn't we all be subject to the same law?"

There has been some progress in recent years, with the Cabinet approving a bill in July 2020 that permits same-sex civil partnerships, although it has yet to be passed by parliament.

Some have hailed it as the big step forward, but many rights advocates oppose the bill as the legislation doesn't grant same-sex couples the same rights as heterosexual couples.

For example, under the proposed law, civil partners would be able to adopt children, jointly own property and pass on inheritance. But they would not enjoy all the rights and benefits provided to married couples.

Pakakul Srikacha, who decided to study in England, told DW that Thailand has launched a series of public campaigns to portray itself as progressive to the international community as the country is heavily reliant on foreign tourism.

It's "ridiculous" that the Thai government has heavily leaned into an LGBTQ-friendly image in marketing campaigns to promote tourism, Srikacha said.

"The Tourism Authority of Thailand's gothaibefree.com website, for instance, shows photos of LGBTQ couples all over the country expressing their love freely," she said. "That's the image Thailand portrays to the international community, but the reality is different," the 30-year-old added.

Though the government has a welcoming attitude toward foreign LGBTQ tourists, Pakakul says that her plight and that of other Thai LGBTQ people remains ignored.

Nattawut says she thinks it's "paradoxical" that the government "wants money from these tourists by posing as an LGBTQ paradise" yet "doesn't really have laws in place" to protect its own LGBTQ communities.

Akekawat said recognizing same-sex marriages in Thailand would be a catalyst for change in the country's ongoing battle for equality and "open many doors for members of the LGBTQ community."

Activists in Thailand have launched an online petition calling for marriage equality. They are pushing for a bill that guarantees marriage equality to all, regardless of sexual orientation, to be submitted to parliament.

The petition has already garnered more than 278,000 signatures.

"It's a long fight we are in for. Even If the bill is not passed, whatever obstacles stand in our way, we'll persevere and just collect signatures again and again," Akekawat said.