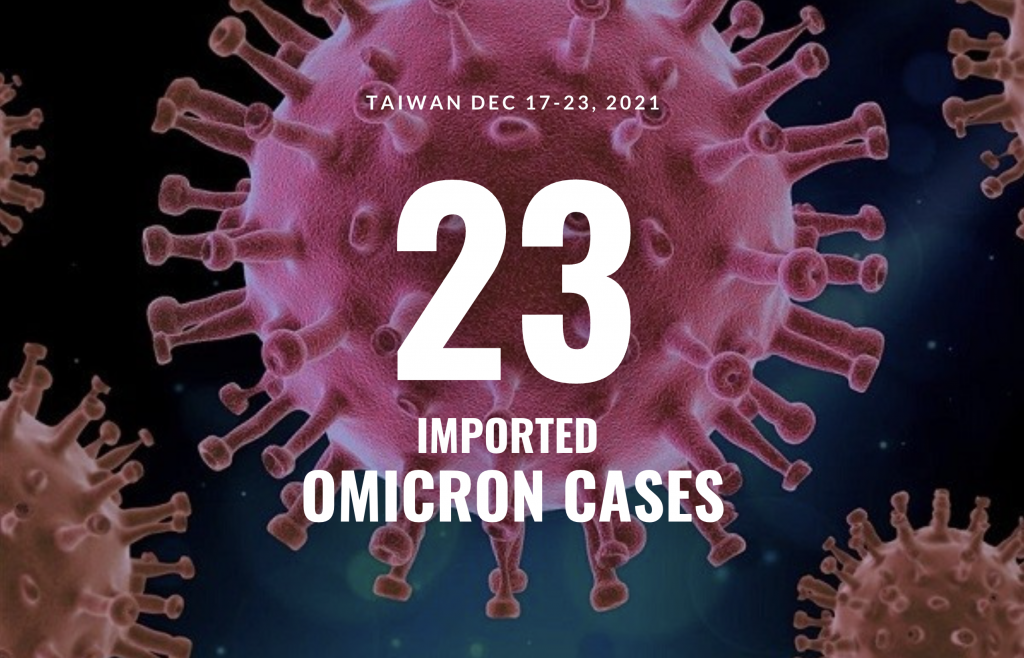 During a press conference on Friday, Philip Lo (羅一鈞), deputy head of the CECC’s medical response division, announced that 23 Omicron cases have been detected this week. That brings Taiwan's total number of imported Omicron cases to 27.

Although all of these cases qualify as breakthrough infections, they are mild or asymptomatic. The U.S. is where the largest number of imported Omicron cases has originated from at 12 cases.

Lo said that out of the 23 Omicron cases this week, 11 were confirmed on Thursday evening (Dec. 23). Out of the 27 Omicron cases Taiwan has reported thus far, Lo said that they have originated from eight countries, including the U.S., the U.K., Brazil, Canada, Eswatini, Colombia, Germany, and Nigeria.

He emphasized that these cases were intercepted at the border or during quarantine and were detected quite early. He pointed out that these cases had all been vaccinated with two doses of a COVID vaccine, meeting the criteria to be classified as breakthrough infections.

According to Lo, the average interval from the second vaccine dose to infection was 4.98 months. As for the vaccines these cases had received, Lo said that 12 have been vaccinated with the Pfizer-BioNTech (BNT) jab, five had received Moderna, four had been inoculated with AstraZeneca, and the remaining six had been given a mixture of brands.

Lo pointed out that most of the confirmed cases are young people under the age of 40 who had been returning home after either studying or working abroad. Their Ct values range from 20 to 30, with a few ranging from 14 to 19, with the viral count correlating to the timing of testing.

As for symptoms, Lo said that 13 are asymptomatic and 14 have mild symptoms, including cough and headache. There was one case who experienced an abnormality with their sense of taste, along with a cough, sore throat, diarrhea, muscle ache, and a high Ct value of 18.

In addition, 14 cases of the Delta variant were also detected among imported infections this week. Lo said that most of the cases were imported from Southeast Asian countries such as Vietnam and Cambodia, but there were also infections from the U.K., the U.S., and Ireland.

Lo said that it seems that the global trend is that two variants are prevalent at the same time, with Omicron on a trend to gradually surpass Delta. Therefore, Lo said that the border will continue to be tightly restricted and testing will be stepped up.