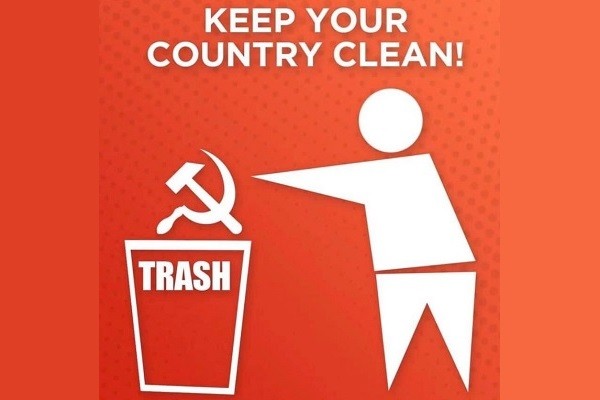 TAIPEI (Taiwan News) — Lithuanian Parliamentarian Matas Maldeikis on Wednesday (Dec. 22) posted a simple retort to China's threat to dump the Baltic country into the "garbage bin of history" that has gone viral on social media.

On Monday (Dec. 20), China's state-run mouthpiece the Global Times cited Chinese Foreign Ministry spokesperson Zhao Lijian (趙立堅) as condemning Lithuania for allowing Taiwan to open a representative office in Vilnius by saying "Lithuania stands on the opposite side of universal principles and justice which will never end well." Zhao then warned that "those who insist on acting in collusion with Taiwan secessionist forces will eventually be swept into the garbage bin of history."

Maldeikis on Wednesday responded on Twitter by writing that the Chinese Communist Party (CCP) is threatening to "sweep Lithuania into the trashcan of history." He then asserted that this is ironic because "that's where communism already is," before closing with the hashtag "#StandWithTaiwan," quickly gaining nearly 4,000 likes, over 1,000 retweets, and 300 plus comments. His tweet also had around 1,500 upvotes in the Taiwan subreddit.

Although officially demoted from his post as managing editor of the Global Times, Hu Xijin (胡錫進) on Thursday (Dec. 23) retweeted the post and wrote that Maldeikis has a "silver tongue, but a poor memory." He claimed that the Baltic country had "just crept off that trashcan 30 years ago by fluke."

Hu admonished Maldeikis to "have some IQ and EQ, and don't be arrogant." He claimed that the parliamentarian has a "sense of crisis that Lithuania may go back there at any time."

That same day, Maldeikis in turn retweeted Hu's post and pointed out that Hu is no longer the editor of the Global Times. He questioned whether Hu had been fired because his "attempts to attack Lithuania backfired embarrassingly?"

Maldeikis suggested that Hu be sent to a reeducation camp for his poor performance. He then included the hashtag "#PeoplesRepublicOfComedy" which is a term he coined late in late November to mock the CCP's attempts to punish his country for strengthening ties with Taiwan.

The Chinese Communist Party is threatening to "sweep Lithuania into the trashcan of history", which is ironic, because that's where communism already is.#StandWithTaiwan