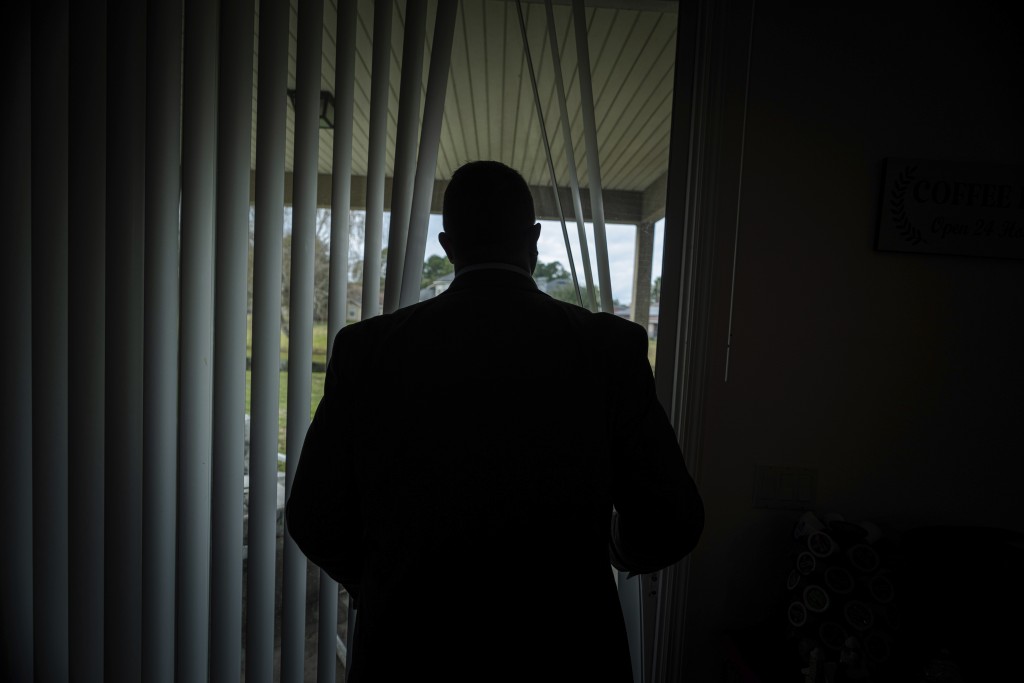 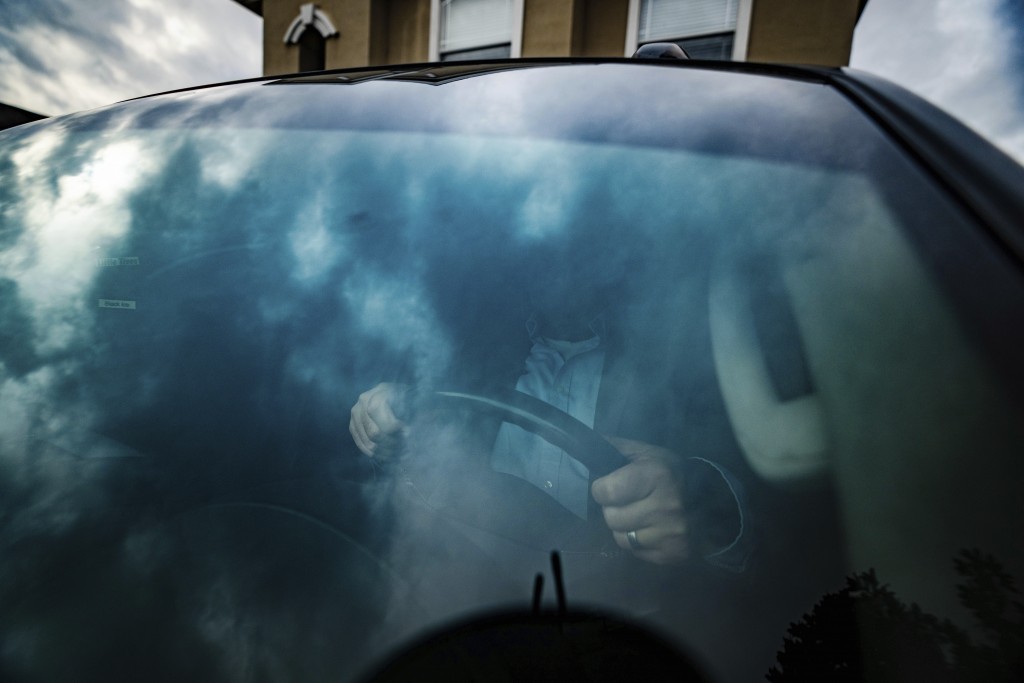 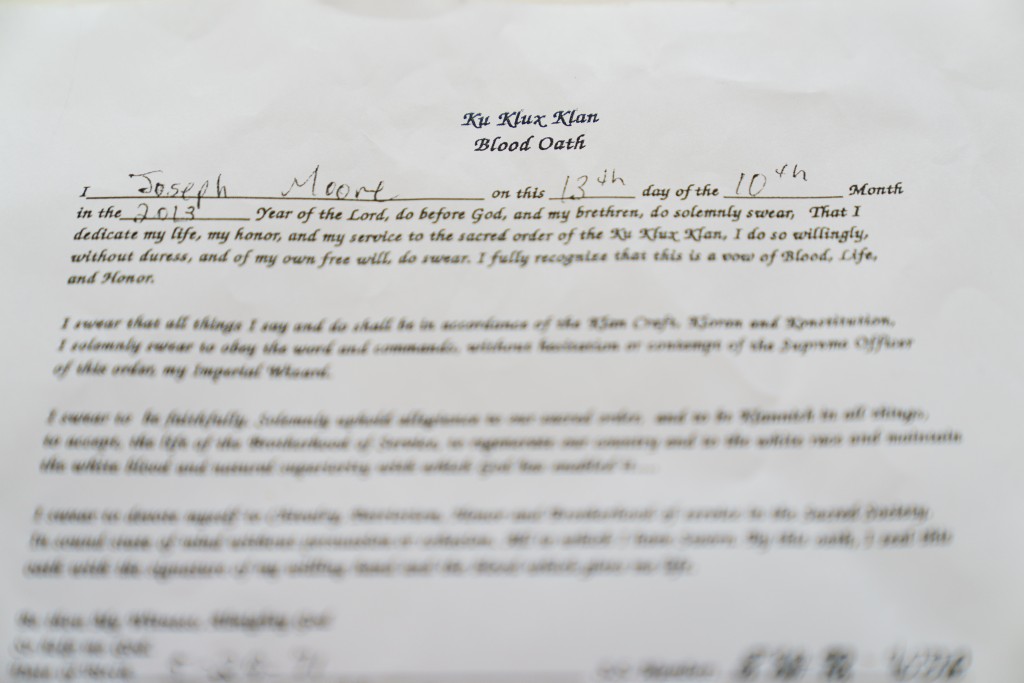 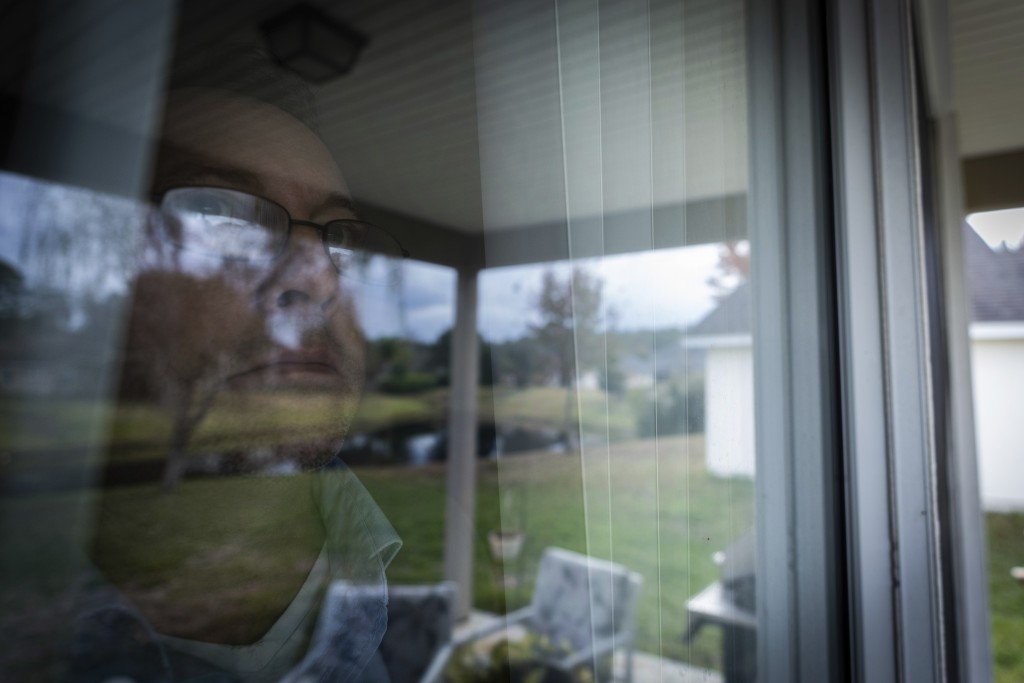 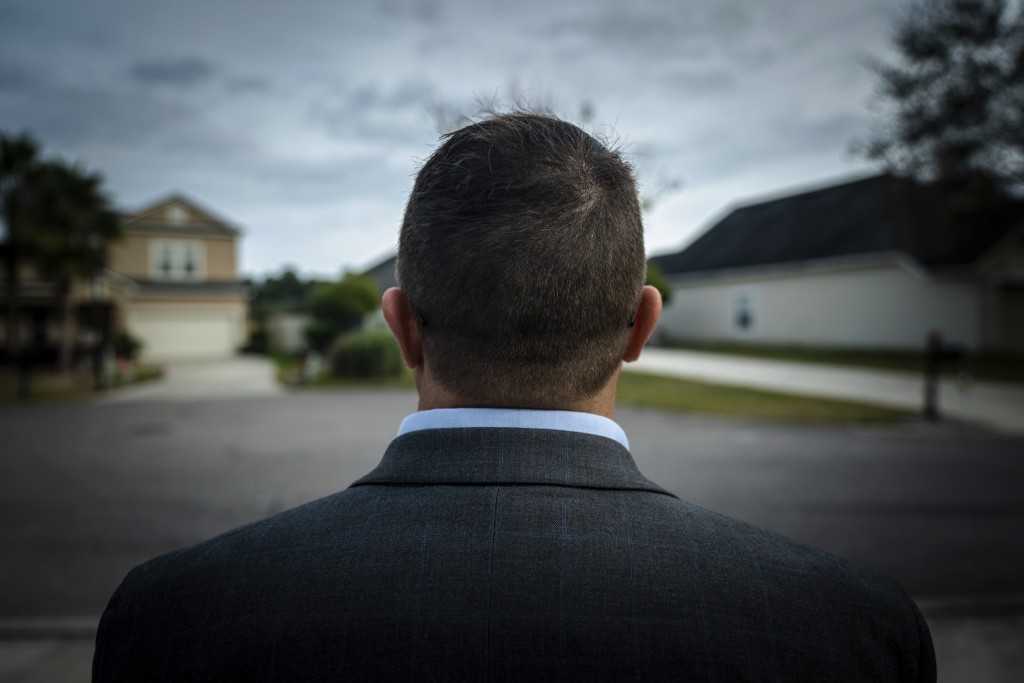 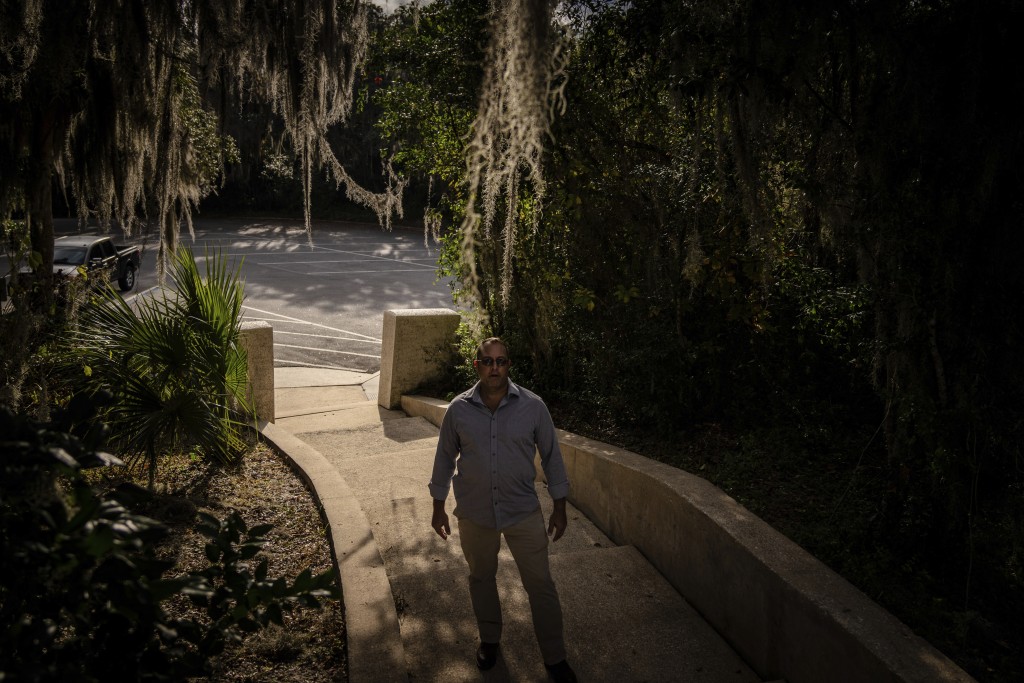 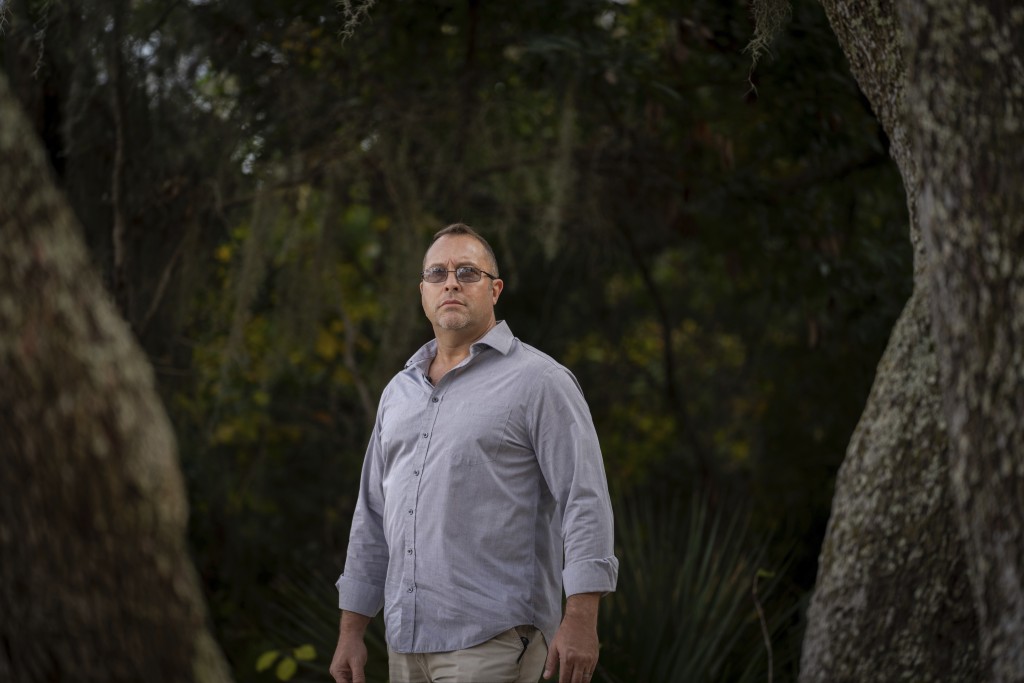 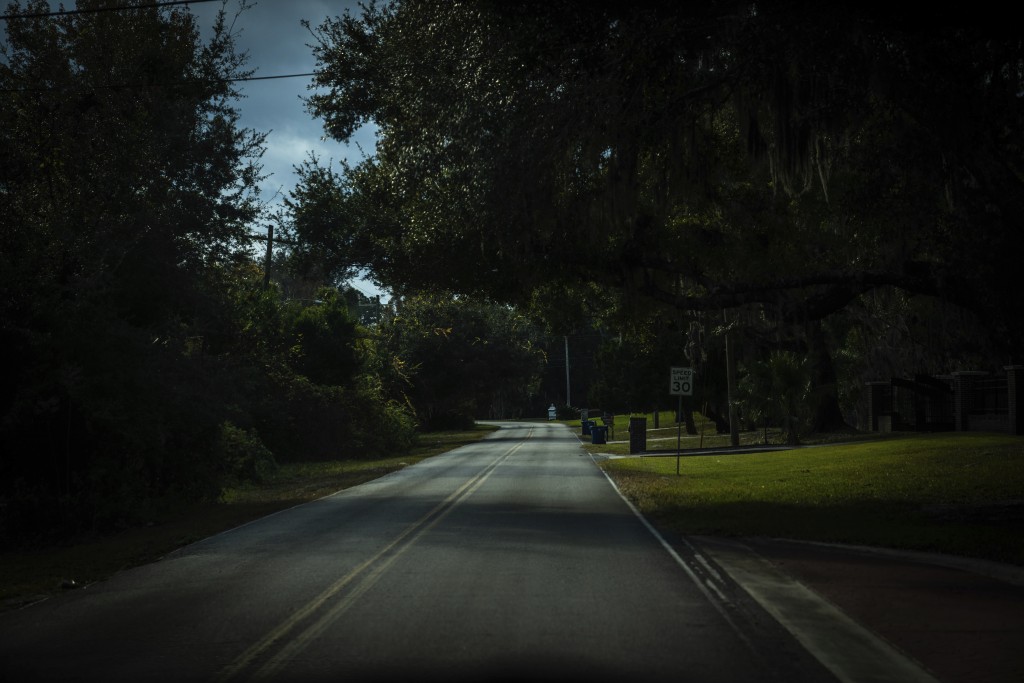 At times the U.S. Army veteran donned a white robe and hood as a hit man for the Ku Klux Klan. He attended clandestine meetings and participated in cross burnings. He even helped plan the murder of a Black man.

However, Moore wore something else during his years in the klan — a wire for the FBI. He recorded his conversations with his fellow klansmen, and shared what he learned with federal agents trying to crack down on white supremacists in Florida law enforcement.

One minor mistake, one tell, he believed, meant a certain, violent death.

“I had to realize that this man would shoot me in the face in a heartbeat,” Moore said in a deep, slow drawl, remembering a particularly scary meeting in 2015. But it was true of many of his days.

The married father of four helped the federal government foil at least two murder plots, according to court records. He was also an active informant when the FBI exposed klan members working as law enforcement officers in Florida at the city, county and state levels.

Today, he and his family live under new names. Apart from testifying in court, the 50-year-old has never discussed his undercover work in the KKK publicly. But he reached out to a reporter after The Associated Press published a series of stories about white supremacists working in Florida’s prisons that were based, in part, on records and recordings detailing his work with the FBI.

“The FBI wanted me to gather as much information about these individuals and confirm their identities,” Moore said of law enforcement officers who were involved with the klan.

“From where I sat ... it is more prevalent and consequential than any of them are willing to admit.”

The FBI first asked Moore to infiltrate a klan group in rural north Florida in 2007.

Moore said he came across dozens of police officers, prison guards, sheriff deputies and other law enforcement officers who were involved with the klan and outlaw motorcycle clubs.

He alerted the feds to a plot to murder a Hispanic truck driver, he said. Then he pointed the FBI toward a deputy with the Alachua County Sheriff’s Office who was a member of the same group. The FBI also identified a member of the klan cell working for the Fruitland Park, Florida, police department.

His years as an informant occurred during a critical time for the nation’s domestic terrorism efforts. In 2006, the FBI had circulated an intelligence assessment about the klan and other groups trying to infiltrate law enforcement ranks. The assessment said some in law enforcement were volunteering “professional resources to white supremacist causes with which they sympathize.”

The FBI did not answer a series of questions sent by the AP about Moore’s work.

Moore said he joined the klan only after the government approached him. As a U.S. Army-trained sniper, he said he felt that if his country asked him to protect the public from domestic terrorists, he had a duty .

Moore said he never shared the klan's racist views and never used racial slurs while under cover. On FBI recordings reviewed by the AP, he was never heard using racial slurs like his former klan brothers.

But he also acknowledges that successful undercover work required him to change into a wholly different person.

“I laid out a character that had been overseas. That had received medals in combat," Moore said. “That had special operations experience — more experience than I had. But someone that they would feel confident would be a useful asset to the organization at a much higher level.”

It worked, and Moore was given high level access.

“If you’re not credible, if you’re not engaged on all levels, you don’t get to go home to your family,” he said.

It also required Moore to lie to his wife. Eventually she became suspicious and he cracked. He told her and her parents what he was doing.

When the FBI discovered that his wife knew, they ended the relationship with the agency.

But in 2013, the agency was back, asking him to infiltrate a different Florida klan chapter.

Within a year of becoming “naturalized,” he’d become a Grand Knight Hawk of the “klavern” based in rural north central Florida. He was in charge of security, and the go-to guy for violence.

It was at a cross-burning ceremony in December 2014 that Charles Newcomb, the “Exalted Cyclops” of the chapter, pulled him aside to discuss a scheme to kill a Black man. Warren Williams was a former inmate who’d gotten into a fight with one of their klan brothers. The klansmen wanted Williams dead.

Moore alerted the FBI. He then recorded discussions of the murder plot that would lead to criminal convictions for three klansmen.

Moore said the three former prison guards implicated in the murder plot operated among a group of other officer-klan members at the Reception and Medical Center in Lake Butler, Florida, a prison where new inmates are processed. He said the officers he knew were actively recruiting at the prison.

Florida’s Department of Corrections disputes that.

“Every day more than 18,000 correctional officers throughout the state work as public servants, committed to the safety of Florida’s communities. They should not be defamed by the isolated actions of three individuals who committed abhorrent and illegal acts several years prior,” the department said in an emailed statement.

Spokeswoman Michelle Glady has told AP the agency found no evidence of a wider membership by extremist white supremacist groups, or a systemic problem. She said every allegation of wrongdoing is investigated by the department’s inspector general.

“That statement by the state is not accurate,” said Moore, who asserts he saw evidence of a more pervasive problem.

After Moore testified in that case, his FBI work ended because he’d been publicly identified.

“I was on track to uncover more activity in law enforcement, but the immediate threat to the public with the murder plot was a priority,” Moore said.

He went public now because he does not want his work, and those of other confidential informants who put their lives on the line to help expose domestic extremists, to have been in vain.

He wants corrections and law enforcement leaders to root out white supremacists and other violent extremists.

“If you want to know why people don’t trust the police, it’s because they have a relative or friend that they witness being targeted by an extremist who happens to have a badge and a gun. And I know as a fact that this has occurred. I stopped a murder plot of law enforcement officers,” said Moore.